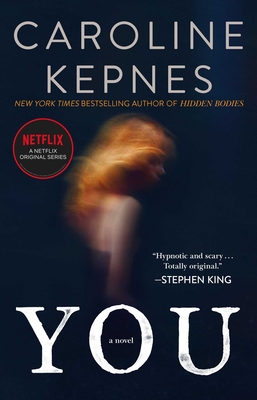 This is book number 1 in the The You Series series.

“I am riveted, aghast, aroused, you name it. The rare instance when prose and plot are equally delicious.” —Lena Dunham

From debut author Caroline Kepnes comes You, one of Suspense Magazine’s Best Books of 2014, and a brilliant and terrifying novel for the social media age.

When a beautiful, aspiring writer strides into the East Village bookstore where Joe Goldberg works, he does what anyone would do: he Googles the name on her credit card.

There is only one Guinevere Beck in New York City. She has a public Facebook account and Tweets incessantly, telling Joe everything he needs to know: she is simply Beck to her friends, she went to Brown University, she lives on Bank Street, and she’ll be at a bar in Brooklyn tonight—the perfect place for a “chance” meeting.

As Joe invisibly and obsessively takes control of Beck’s life, he orchestrates a series of events to ensure Beck finds herself in his waiting arms. Moving from stalker to boyfriend, Joe transforms himself into Beck’s perfect man, all while quietly removing the obstacles that stand in their way—even if it means murder.

A terrifying exploration of how vulnerable we all are to stalking and manipulation, debut author Caroline Kepnes delivers a razor-sharp novel for our hyper-connected digital age. You is a compulsively readable page-turner that’s being compared to Gone Girl, American Psycho, and Stephen King’s Misery.

Caroline Kepnes is the author of You, Hidden Bodies, Providence, and numerous short stories. Her work has been translated into a multitude of languages and inspired a television series adaptation of You, currently on Netflix. Kepnes graduated from Brown University and previously worked as a pop culture journalist for Entertainment Weekly and a TV writer for 7th Heaven and The Secret Life of the American Teenager. She grew up on Cape Cod, Massachusetts, and now lives in Los Angeles.

"Hypnotic and scary...never read anything quite like it."
— Stephen King

“My most favorite thriller."
— Lena Dunham

"YOU is superb. So funny, apart from anything else, and properly clever. It is: different, hot."
— Sophie Hannah, New York Times bestselling author of The Monogram Murders and The Other Woman's House

"This is one of the most unsettling books I’ve read this year, but despite being thoroughly creeped out, I couldn’t put it down even for a second. It’s narrated by the villain, which makes for a rather unnerving read. I even found myself accidentally rooting for him as he was about to commit pretty heinous crimes. Whoops."
— Bustle

"An impending sense of dread hangs over Kepnes' cleverly claustrophobic debut, in which love takes on a whole new meaning...Kepnes keeps the reader guessing."
— Kirkus Reviews

“Intense and deeply disturbing, You is a dark story told in a fresh voice, and an addictive read from beginning to end. Being inside Joe Goldberg’s head was both a thrill and a nightmare, and yet I didn’t want to wake up. I look forward to more from the very talented Caroline Kepnes.”
— Jennifer Hillier, author of THE BUTCHER

“Chilling...[Kepnes' YOU] will have readers looking over their shoulders.”
— Publisher's Weekly

“A deeply dark yet mesmerizing first novel of two people caught in a romantic tangle with an ever-tightening knot.”
— Booklist

"Is Caroline Kepnes’ 'You' the next GONE GIRL? It'll take you inside a psychopath’s head... and might even make you like him. A mad and macabre love story."
— TimeOut Australia

"Could be the next GONE GIRL...a perverse suspense romance about obsession, sex, and secrets."
— PopSugar.com

“All-consuming – a book that will not release its hold on you, even when you are not actively reading it.”
— BoloBooks.com

“You…had the page-turning quality of classic (Stephen) King at his peak.”
— The Devil's Advocate

“Kepnes’debut novel is gripping in both substance and style.”
— Closer Magazine

“You is a deliciously terrifying stalker tale that grabbed hold of me on page one and kept me captivated right until the very end…Utterly unputdownable.”
— Kathryn's Inbox

“If you like twisted psychological horror with a liberal dose of hip and more than a dollop of perversion, this one’s for you!”
— Pages Podcast

“If you liked GONE GIRL’S portrayal of a marriage in decline, the demented love story at the heart of YOU will have you gripped….This book will give you Stockholm syndrome."
— Harpers Bazaar (UK)

“You by Caroline Kepnes completely blew me away…It’s an exceptional thriller that is chillingly passionate, dangerous, and quite often left me speechless.”
— The Book Ramblings

"Both original and compelling. If you only read one new thriller this year, make it this one. It will stay with you long after you have put it down."
— Geoffrey Wansell

"You think you know the story: girl meets boy, boy turns out to be a murderous stalker. US journalist Kepnes' debut is a fantastically creepy thriller...the kind of book you put your life on hold for."
— Glamour

“You is the kind of book you will read whenever you have a spare moment. It is the book you will not be able to put down, and once you finish, you will want to start over again.”
— Huffpost Books

"I was immediately hooked—and read it in a matter of hours. Could. Not. Stop."
— Buzzfeed, "37 Books with Plot Twists that Will Blow Your Mind"