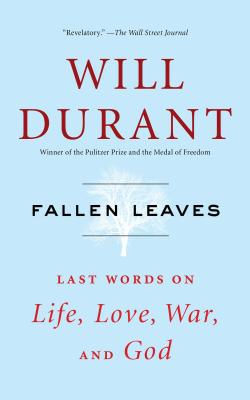 Praised as a “revelatory” book by The Wall Street Journal, this is the last and most personal work of Pulitzer Prize–winning author and historian Will Durant, discovered thirty-two years after his death.

The culmination of Will Durant’s sixty-plus years spent researching the philosophies, religions, arts, sciences, and civilizations from across the world, Fallen Leaves is the distilled wisdom of one of the world’s greatest minds, a man with a renowned talent for rendering the insights of the past accessible. Over the course of Durant’s career he received numerous letters from “curious readers who have challenged me to speak my mind on the timeless questions of human life and fate.” With Fallen Leaves, his final book, he at last accepted their challenge.

In twenty-two short chapters, Durant addresses everything from youth and old age to religion, morals, sex, war, politics, and art. Fallen Leaves is “a thought-provoking array of opinions” (Publishers Weekly), offering elegant prose, deep insights, and Durant’s revealing conclusions about the perennial problems and greatest joys we face as a species. In Durant’s singular voice, here is a message of insight for everyone who has ever sought meaning in life or the counsel of a learned friend while navigating life’s journey.

Will Durant (1885–1981) was awarded the Pulitzer Prize (1968) and the Presidential Medal of Freedom (1977). He spent more than fifty years writing his critically acclaimed eleven-volume series, The Story of Civilization (the later volumes written in conjunction with his wife, Ariel). A champion of human rights issues, such as the brotherhood of man and social reform, long before such issues were popular, Durant’s writing still educates and entertains readers around the world.

"Fallen Leaves is in some ways a slight book. But it is also a revelatory one. Most of Durant's work is about the thoughts and actions of others. Fallen Leaves is very much about the thoughts of Will durant concerning—well, almost everything. You'll find short essays on childhood, old age, death, war, politics, capitalisn, art, sex, God and morality. ... Above all, Fallen Leaves is a portrait of a sensibility. ... Durant was a remarkable specimen of that nearly extinct species, a civilized liberal of wide learning and even wider sympathy for the fundamentals of human aspiration."
— The Wall Street Journal

"Short but persuasive commentaries on a diversity of topics from a respected scholar of humanity."
— Kirkus Reviews

"Some passages, such as his observations on youth and middle age, are personal and specific, while others, such as his ruminations on the existence of God, border on philosophy. . . . [And others] still carry a beneficial sting, such as his thoughts on war and nationalism and his plea for racial harmony (Durant’s civil rights advocacy dated back to 1914). . . . a thought-provoking array of opinions."
— Publishers Weekly

“Some of his musings are provocative, even outrageous…this is a work that demands we think, and it is a worthy conclusion to a long and distinguished career.”
— Booklist

"The book serves as a distillation of wisdom from a distinguished scholar, rendered in elegant prose."
— The New Criterion