These Few Precious Days: The Final Year of Jack with Jackie (Paperback) 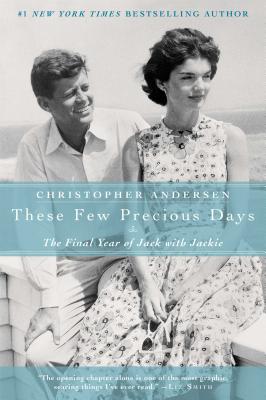 By Christopher Andersen
$16.00
Email or call for price.

#1 New York Times bestselling biographer “Christopher Andersen has a real track record when it comes to celebrity bios.…He looks at Jack and Jackie Kennedy during their final year, pondering aloud whether after all the triumphs and betrayals they still loved each other” (Library Journal­).

They were the original power couple—outlandishly rich, impossibly attractive, and endlessly fascinating.

Now, in this rare, behind-the-scenes portrait of the Kennedys in their final year together, New York Times bestselling biographer Christopher Andersen shows us a side of JFK and Jackie that we’ve never seen before.

Tender, intimate, complex, and, at times, explosive, theirs is a love story unlike any other—filled with secrets, scandals, and bombshells that could never be fully revealed until now.

Christopher Andersen is the critically acclaimed author of eighteen New York Times bestsellers which have been translated into more than twenty-five languages worldwide. Two of his books—The Day Diana Died and The Day John Died (about JFK Jr.)—reached #1. A former contributing editor of Time and longtime senior editor of People, Andersen has also written hundreds of articles for a wide range of publications, including The New York Times, Life, and Vanity Fair. Andersen has appeared frequently on such programs as Today, Good Morning America, NBC Nightly News, CBS This Morning, 20/20, Anderson Cooper 360, Dateline NBC, Access Hollywood, Entertainment Tonight, Inside Edition, 48 Hours, and more.