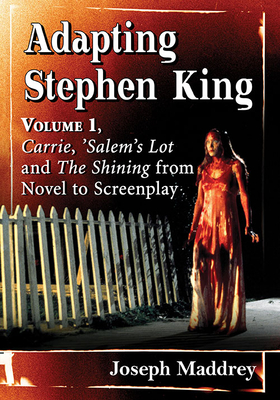 By Joseph Maddrey
Email or call for price.

Stephen King's fiction has formed the basis of more motion picture adaptations than any other living author. Over half a century since his earliest publications, Hollywood filmmakers continue to reinvent, reimagine, remake, and reboot King's stories, with mixed results. This book, volume 1 in a series, examines the various screen adaptations of King's first three novels: Carrie, Salem's Lot, and The Shining. Reaching further than questions of fidelity to the author and adherence to directorial visions, it charts the development of each individual adaptation from first option to final cut. Through old and new interviews with the writers, producers, and directors of these films--as well as in-depth analyses of produced and unproduced screenplays--it illuminates the adaptation process as an intricately collaborative endeavor. Rather than merely synopsize the resulting stories, its goal is to compare, contrast, and contextualize each of these adaptations as the products of their creators.

Joseph Maddrey has researched, written and produced over 100 hours of documentary television, focusing on true crime and the paranormal. He lives in Midlothian, Virginia.