The Lions: When the Going Gets Tough: Behind the scenes (Paperback) 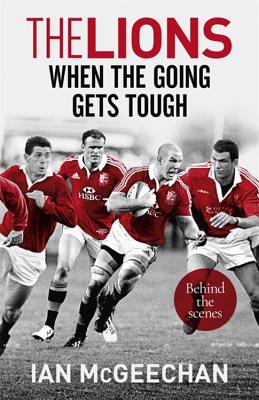 2017 saw the latest contest between the British Lions and New Zealand - the ultimate rugby clash between the northern and southern hemisphere. Ian McGeechan is the 'Ultimate Lion', and no one could have done more than McGeechan to promote the magic of the Lions.

McGeechan played for the Lions in their unbeaten 1974 tour of South Africa, and again in the 1977 tour of New Zealand. Subsequently he has been the head coach on four Lions tours.

In this unique and fascinating book which celebrates the immensity of rugby at the top level, Ian McGeechan uses his own coaching notes to provide his special insight and background into what it means to be a Lion. By looking at various themes such as selection, how to create the right environment and how to build the players into what he describes as 'Test-match animals' the reader learns how some of the most successful Lions tours in history were built. Writing always with passion for his various themes it is easy to see how he inspired his players to extraordinary physical endeavour.

Rich in anecdote as well as facts, McGeechan brings to life many of the rugby legends with whom he played or coached - including Gareth Edwards, Gavin Hastings, Martin Johnson and Paul O'Connell amongst others.

Hugely readable The Lions: When the Going Gets Tough splendidly conveys the massive excitement that is generated whenever there is a Lions tour.

Sir Ian McGeechan has excelled at every level of the modern rugby game. One of the best centres ever to put on a Scottish shirt, he won 32 caps for his country, and 8 for the Lions - he was a core element of Willie John McBride's all-conquering 1974 Lions tour in South Africa.

Turning his hand to coaching, he coached Headingley from 1980-83 and was involved in coaching Scotland U21s and Scotland Bs before taking over as head coach of his national team in 1985. He quickly adapted their playing style to their free-running strengths. Against all odds, they prized the Grand-Slam from England in 1990.

The true highlight of 'Geech's' coaching career has to be the sensational 1997 Lions tour to South Africa, where a 2-1 victory was won against arguably the toughest team in the world on their home turf.

He has been head coach on four separate occasions, most recently 2009 and coached the mid-week side in 2005.

In 2010 he was knighted for services to Rugby.