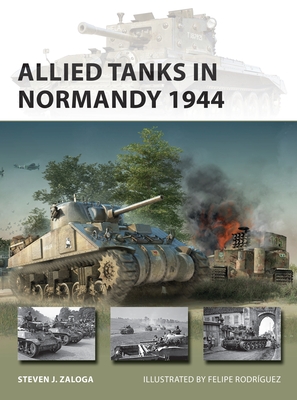 A concisely detailed guide to the Allied tanks that fought from D-Day to the breakout from Normandy, their qualities, numbers, and performance, and how they were used on the battlefield.

When Allied tanks began to roll off the landing craft on D-Day, it marked the start of one of the great periods of tank warfare in World War II. Often outgunned by the German Panzers, and fighting in the close confines of bocage country, they nevertheless managed to break out of Normandy and begin the liberation of Europe. It was a battle that was dominated by the Americans' legendary Sherman, but also saw a wide and complex range of armor committed to battle across the many armies involved, from British Churchills and special-purpose 'Funnies' to the Canadians' Ram tank.

This book explains the qualities, strengths, and weakness of the major British and US tank types as well as associated Allied units in Normandy including the Canadians, Poles, and French, and how they really fought. It will discuss the organization and equipment of the units, providing thumbnail sketches of organization and doctrine as well as statistical data on the types and categories of AFVs that saw action, providing a handy and concise guide for military historians, wargamers, and military modelers.

Steven J. Zaloga received his BA in History from Union College and his MA from Columbia University. He has worked as an analyst in the aerospace industry for over three decades, covering missile systems and the international arms trade, and has served with the Institute for Defense Analyses, a federal think tank. He is the author of numerous books on military technology and military history, with an accent on the US Army in World War II as well as Russia and the former Soviet Union. He currently lives in Maryland.

Felipe Rodríguez Náñez (aka Felipe Rodna) was born in 1976, and lives with his wife and two sons in Salamanca, Spain, where he works as an architect and computer graphics artist. He combines his experience in CG art and his passion for modelling in his illustrations, where he looks for a good balance between technical detail and craft.