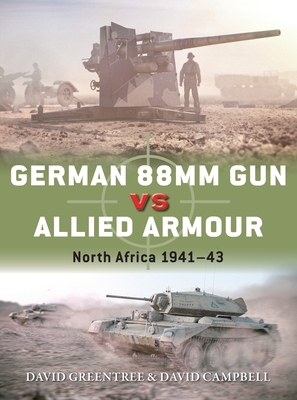 Few weapons developed a more deadly reputation than the German '88' in the role of anti-tank gun, its long reach and lethal hitting power making it a significant problem for every type of British and later American armour. Despite its individual potency, it was almost always utilized as part of a comprehensive system of defences that relied on a mix of weapons carefully deployed in anticipation of the enemy's likely avenue and method of attack. Used in this way, the 88 became a particularly deadly part of the Afrika Korps' attempts to shatter British armoured power in the Western Desert.


Initially extremely successful over the course of 1941 and 1942 in Operations Battleaxe and Crusader, the Allies' tactics and vehicles (such as the American-made M3 and the Crusader III) eventually evolved to deal with the 88's awesome power. This detailed new book tells the story of that evolution and provides an in-depth treatment of this key weapon of World War II.

David Campbell has worked as a new media producer
and content specialist for many years, including roles at IBM, the BBC, various Internet consultancies and the British civil service. He is the author of a number of titles for Osprey.

David Greentree graduated from the University of York with a BA in History before completing an MA in War Studies at King's College London and qualifying as a lecturer in Further Education. In 1995 he accepted a commission in the Royal Air Force and has served in a variety of locations, including Afghanistan and Oman. He has written several books for Osprey, focusing on British military history and World War II.

Ian Palmer is a highly experienced digital artist with two decades of experience in the video games industry, both as a 3D artist and an Art Director. He has a passion for military history, gaming and riding his motorbike. He lives in Warwickshire with his wife, daughter and menagerie of pets.