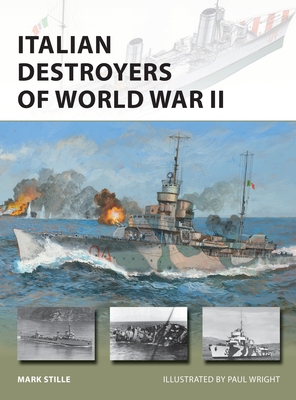 The Italian Royal Navy (Regia Marine or RM) began the Second World War with one of the largest fleets in the world. Included in this was a total of 59 fleet destroyers, and others were added during the war. These were a diverse collection of ships dating back to the First World War, large destroyers built to counter ships of similar size being introduced in the French Navy (the RM's historical enemy), and medium-sized ships which constituted the bulk of the destroyer force. RM destroyers were built for high speed, not endurance since they were only expected to operate inside the Mediterranean. They were also well-armed, but lacked radar.

Mark Stille (Commander, United States Navy, retired) received his BA in History from the University of Maryland and also holds an MA from the Naval War College. He recently concluded a nearly 40-year career in the intelligence community including tours on the faculty of the Naval War College, on the Joint Staff and on US Navy ships. He is the author of numerous Osprey titles focusing on naval history in the Pacific.