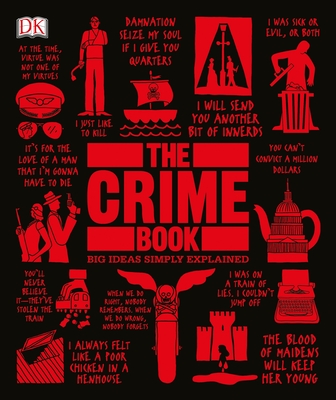 Investigate 100 of the world’s most notorious crimes, including the Great Train Robbery, the Lindbergh kidnapping, and the murders of serial killer Jeffrey Dahmer.

Were the perpetrators delusional, opportunist, or truly evil? Find out what really happened and how the cases were solved.

Discover conmen with sheer verve, such as Victor Lustig who "sold" the Eiffel Tower to scrap dealers in 1925, adrenaline-fuelled escapes, and mind-bending exploits of pirates, kidnappers, and drug cartels. The Crime Book demystifies malware, cybercrimes, and Ponzi schemes and sets out the terrifying ploys of mass murderers from 16th-century Elizabeth Báthory who drained young girls’ blood to the more recent exploits of Rosemary and Fred West.

Like a virus, crime mutates and adapts. The Crime Book explains how pivotal moments in history opened up new opportunities for criminals, such as the smuggling of alcohol during the American Prohibition era. It also charts developments in justice and forensics including the Innocence Project, which used DNA testing to exonerate wrongly convicted convicts. It examines how the forces of law and order have fought back against crime, explaining ingenious sting operations such as tracking down the jewel thief Bill Mason and the final capture of murderer Ted Bundy.

With a foreword from bestselling crime author Cathy Scott, The Crime Book is an enthralling introduction to humanity’s darker side.

Foreword writer and consultant Cathy Scott is a Los Angeles Times best-selling author, and an established crime writer and investigative journalist for The New York Times and Reuters. Best known for writing The Killing of Tupac Shakur and The Murder of Biggie Smalls, she has written extensively about street gangs and organized crime, including mob daughter Susan Berman in Murder of a Mafia Daughter, and drug kingpin "Freeway" Rick Ross.

"[The Big Ideas Simply Explained books] are beautifully illustrated with shadow-like cartoons that break down even the most difficult concepts so they are easier to grasp. These step-by-step diagrams are an incredibly clever learning device to include, especially for visual learners." — Examiner.com

"[I]f you dig anything crime related this is for you." — CrimeSpree Magazine