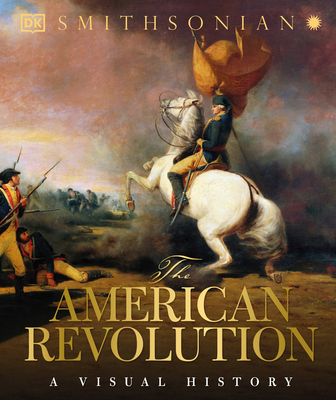 By DK, Smithsonian Institution (Contributions by)
$40.00

Uncover the remarkable story of the American Revolution! Who were the Redcoats, and what was the Boston Tea Party? Explore key events like the British surrender at Yorktown, and the writing of the Declaration of Independence.

Written in association with the esteemed Smithsonian Institution, this beautiful visual reference book will transport you back in time and onto the front lines of the American Revolution.


Take chronological steps through the American Revolution, starting with the first stirrings of colonial resistance. Learn about important events and key moments of the war that gave birth to the American republic. Meet the most memorable people from the period, from George Washington to Benedict Arnold, and explore first-person accounts by soldiers and civilians.

This history book for children grade 7 and up gives you a complete overview of the most fascinating events during the war. The action is brought to life through illustrated accounts of every major military action and comprehensive timelines for every stage of the conflict. Gallery spreads feature the weapons, arms, and uniforms that were used, to give you a full picture of what it was like.

Large color pictures, black-and-white drawings, and detailed maps add intriguing visuals to the history of America, so reading can be engaging and enjoyable. This visual reference book also details the politics of the war and the different parts of society impacted by the events. Learn about the treatment of prisoners and the revolution's implications for women, Native Americans, and African-Americans. Dive in and explore the parts of the American Revolution you haven’t yet discovered.

Mapping the Road to American Independence

The American Revolution is the most significant event in American history. Without it, there would not be the United States of America. More than 240 years after the signing of the Declaration of Independence, this educational book demonstrates why this historical period is still so important today.

Journey through the most significant events and battles:

DK was founded in London in 1974 and is now the world's leading illustrated reference publisher and part of Penguin Random House, formed on July 1, 2013. DK publishes highly visual, photographic nonfiction for adults and children. DK produces content for consumers in over 87 countries and in 62 languages, with offices in Delhi, London, Melbourne, Munich, New York, and Toronto. DK's aim is to inform, enrich, and entertain readers of all ages, and everything DK publishes, whether print or digital, embodies the unique DK design approach. DK brings unrivalled clarity to a wide range of topics with a unique combination of words and pictures, put together to spectacular effect. We have a reputation for innovation in design for both print and digital products.   Our adult range spans travel, including the award-winning DK Eyewitness Travel Guides, history, science, nature, sport, gardening, cookery, and parenting. DK’s extensive children’s list showcases a fantastic store of information for children, toddlers, and babies. DK covers everything from animals and the human body, to homework help and craft activities, together with an impressive list of licensing titles, including the bestselling LEGO® books. DK acts as the parent company for Alpha Books, publisher of the Idiot's Guides series and Prima Games, video gaming publishers, as well as the award-winning travel publisher, Rough Guides.

"There's enough content to give readers an understanding of why this historical period is important; some of the material will even give students a better grasp than textbooks." — School Library Journal