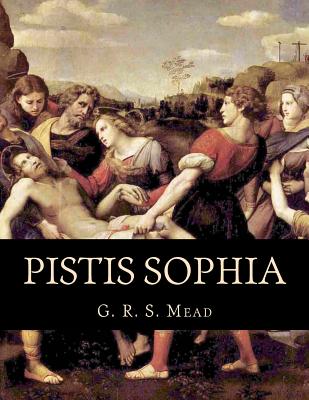 Pistis Sophia is an important Gnostic text, possibly written as early as the 2nd century. The five remaining copies, which scholars place in the 5th or 6th centuries, relate the Gnostic teachings of the transfigured Jesus to the assembled disciples (including his mother Mary, Mary Magdalene, and Martha), when the risen Christ had accomplished eleven years speaking with his disciples. In it the complex structures and hierarchies of heaven familiar in Gnostic teachings are revealed. The female divinity of gnosticism is Sophia, a being with many aspects and names. She is sometimes identified with the Holy Spirit itself but, according to her various capacities, is also the Universal Mother, the Mother of the Living or Resplendent Mother, the Power on High, She-of-the-left-hand (as opposed to Christ, understood as her husband and he of the Right Hand), as the Luxurious One, the Womb, the Virgin, the Wife of the Male, the Revealer of Perfect Mysteries, the Holy Dove of the Spirit, the Heavenly Mother, the Wandering One, or Elena (that is, Selene, the Moon). She was envisaged as the Psyche of the world and the female aspect of Logos. The title Pistis Sophia is obscure, and is sometimes translated Faith wisdom or Wisdom in faith or Faith in wisdom. A more accurate translation taking into account its gnostic context, is the faith of Sophia, as Sophia to the gnostics was a divine syzygy of Christ, rather than simply a word meaning wisdom. In an earlier, simpler version of a Sophia, in the Berlin Codex and also found in a papyrus at Nag Hammadi, the transfigured Christ explains Pistis in a rather obscure manner: Again, his disciples said: Tell us clearly how they came down from the invisibilities, from the immortal to the world that dies? The perfect Saviour said: Son of Man consented with Sophia, his consort, and revealed a great androgynous light. Its male name is designated 'Saviour, begetter of all things'. Its female name is designated 'All-begettress Sophia'. Some call her 'Pistis'. The best-known of the five manuscripts of Pistis Sophia is bound with another Gnostic text titled on the binding "Piste Sophiea Cotice". This "Askew Codex" was purchased by the British Museum (now British Library) in 1795 from a Dr. Anthony Askew. Until the discovery of the Nag Hammadi library in 1945, the Askew Codex was one of three codices that contained almost all of the gnostic writings that had survived the suppression of such literature both in East and West, the other two codices being the Bruce Codex and the Berlin Codex. Aside from these primary sources, everything written about Gnosticism before the Nag Hammadi library became available is based on quotes, characterizations, and caricatures in the writings of the enemies of Gnosticism. The purpose of these heresiological writings were polemical, presenting Gnostic teachings as absurd, bizarre, and self-serving, and as an aberrant heresy from a proto-orthodox and orthodox Christian standpoint. The text proclaims that Jesus remained on earth after the resurrection for 11 years, and was able in this time to teach his disciples up to the first (i.e. beginner) level of the mystery. It starts with an allegory paralleling the death and resurrection of Jesus, and describing the descent and ascent of the soul. After that it proceeds to describe important figures within the gnostic cosmology, and then finally lists 32 carnal desires to overcome before salvation is possible, overcoming all 32 constituting salvation. Pistis Sophia includes quotes from five of the Odes of Solomon, found in chapters between 58 and 71. Pistis Sophia was the only known source for the actual wording of any of the Odes until the discovery of a nearly-complete Syriac text of the Odes in 1909. Because the first part of this text is missing, Pistis Sophia is still the only source for Ode 1.