Plastic Ocean: How a Sea Captain's Chance Discovery Launched a Determined Quest to Save the Oceans (MP3 CD) 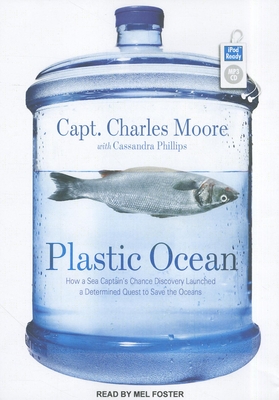 In the summer of 1997, Charles Moore set sail from Honolulu with the sole intention of returning home after competing in a trans-Pacific race. To get to California, he and his crew took a shortcut through the seldom-traversed North Pacific Subtropical Gyre, a vast oceanic desert where winds are slack and sailing ships languish. There, Moore realized his catamaran was surrounded by a plastic soup. He had stumbled upon the largest garbage dump on the planet-a spiral nebula where plastic outweighed zooplankton, the ocean's food base, by a factor of six to one. In Plastic Ocean, Moore recounts his ominous findings and unveils the secret life and hidden properties of plastics. From milk jugs to polymer molecules small enough to penetrate human skin or be unknowingly inhaled, plastic is now suspected of contributing to a host of ailments including infertility, autism, thyroid dysfunction, and some cancers. A call to action as urgent as Rachel Carson's seminal Silent Spring, Moore's sobering revelations will be embraced by activists, concerned parents, and seafaring enthusiasts concerned about the deadly impact and implications of this manmade blight.

Capt. Charles Moore has logged over 100,000 miles on research voyages, and his work has been featured on NPR, National Geographic, and in the "Wall Street Journal." Cassandra Phillips has worked as a newspaper reporter and won grant funding from the USDA Small Business and Innovation and Research program to research plastic's effects on orchids.

Mel Foster has narrated over 150 audiobooks and has won several awards. Twice an Audie finalist for "1864: Lincoln at the Gates of History" by Charles Bracelen Flood and "Finding God in Unexpected Places" by Philip Yancey, he won for the latter title.

"A hero . . . Moore is the first person to have pursued serious scientific research by sampling the garbage patch." ---The New York Times