Egyptian Book of the Dead: The Book of Going Forth by Day: The Complete Papyrus of Ani Featuring Integrated Text and Full-Color Images (Paperback) 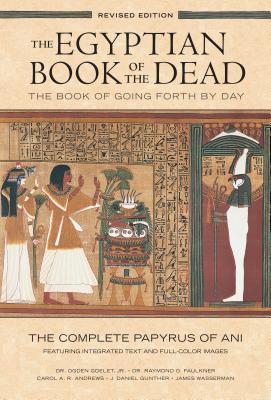 For the first time in 3,300 years, The Egyptian Book of the Dead: The Book of Going Forth by Day: The Papyrus of Ani is showcased in its entirety in seventy four magnificent color pages.

Maybe the most stunning presentation of this book in 3,300 years: Upon death, it was the practice for some Egyptians to produce a papyrus manuscript called the Book of Going Forth by Day or the Book of the Dead. A Book of the Dead included declarations and spells to help the deceased in the afterlife. The Papyrus of Ani is the manuscript compiled for Ani, the royal scribe of Thebes. Written and illustrated almost 3,300 years ago, The Papyrus of Ani is a papyrus manuscript with cursive hieroglyphs and color illustrations. To most, it is the most beautiful, best preserved, and complete example of ancient Egyptian philosophical and religious thought known to exist.

The Egyptian Book of the Dead is a captivating history book and an integral part of the world's spiritual heritage. It is an artistic rendering of the mysteries of life and death. For the first time since its creation, this ancient papyrus is now available in full color with an integrated English translation directly below each image. This twentieth anniversary edition of The Egyptian Book of the Dead has been revised and expanded to include:
• Significant improvements to the display of the images of the Papyrus.
• A survey of the continuing importance of ancient Egypt in modern culture.
• A detailed history of Egyptian translation and philology since the discovery of the Rosetta Stone in 1799.
• And, a state of the art Annotated Bibliography and Study Guide for Ancient Egyptian studies.

As the third revised edition, the entire corpus of this critical work is given its most accessible and lavish presentation ever.
• Includes a detailed history of Egyptian scholarship, an annotated bibliography and study guide, and several improvements to the color plates.
• Makes an excellent gift for people interested in Egyptology books, mythology books, illustrated history books, world history books, and ancient religion books.

Carol A. R. Andrews served as Assistant Keeper/Senior Research Assistant in the Department of Egyptian Antiquities at the British Museum from 1971 to 2000.

James Wasserman is an author and book designer whose innovative vision shaped this unique book.

J. Daniel Gunther is an Egyptological scholar and the author of several works on esoteric symbolism.

Dr. Raymond O. Faulkner (d. 1982) was a renowned British Egyptologist, the translator of many important ancient texts, and the author of numerous scholarly publications.

Dr. Ogden Goelet, Jr. is a Clinical Professor of Egyptian Language and Culture in the Department of Middle Eastern and Islamic Studies at New York University.