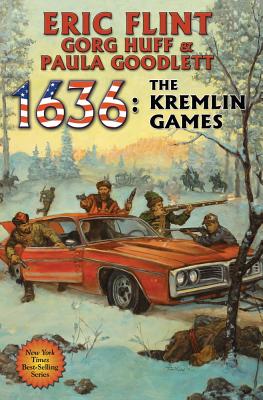 This is book number 14 in the The Ring of Fire series.

A New York Times bestseller in hardcover.  A new addition to the multiple New York Times best-selling Ring of Fire series,. After carving a place for itself in war-torn 17th century Europe, the modern town of Grantville, West Virginia continues its quest for survival. A Grantville resident helps Russia modernize, but he in turn must deal with 1600s Russian culture, politics, and women–or wind up dead.

#14 in the multiply bestselling Ring of Fire Series.

1636. Grantville has bounced back and established its new mission and identity, but it seems some have been left behind—people like Bernie Zeppi, courageous in the battle, but unable to figure out what to do with himself in a world that’s utterly changed. Then Russian emissary Vladimir Gorchacov arrives in Grantville and hires Bernie to journey to Moscow and bring the future to a Russia mired in slavish serfdom and byzantine imperial plots. Bernie jumps at the chance. He figures it to be an easy gig, complete with high pay and hot-and-cold running women.

But one thing Bernie hasn’t counted on is the chance to find his purpose in Mother Russia, from fighting the needless death of children from typhoid to building the first dirigible in Russian history. And then there’s love. Just as Bernie realizes his feeling for a certain Russian noblewoman may have gone way beyond respect, he finds them both enmeshed in the deadly politics of Kremlin power struggles.

War with Poland is afoot and Russia itself is about to get a revolution from within–three centuries early. Bernie Zeppi, former Grantville auto mechanic, is going to have the chance to prove he’s not the loser he believed himself to be. For now Bernie’s task is to save the woman he loves and the country he has come to call his own from collapse into a new Dark Age.

About 1636: The Kremlin Games:
“…a well-constructed plot filled with satisfying measures of comedy, romance, political intrigue, and action.”—Publishers Weekly

“…each new entry appears better than the previous one, a seemingly impossible feat…terrific.”—Midwest Book Review

Eric Flint is a modern master of alternate history fiction with 3 million books in print. He’s the author/creator of the multiple New York Times best-selling Ring of Fire series, starting with first novel 1632. With David Drake he has written six popular novels in the Belisarius alternate Roman history series, and with David Weber he has collaborated on 1633 and 1634: The Baltic War, as well as four novels in Weber's Honorverse series. Flint was for many years a labor union activist. He lives near Chicago, Illinois.