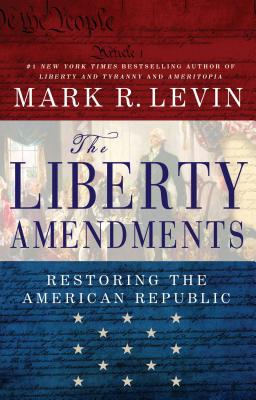 The long-awaited new book on how to fix our broken government by the #1 New York Times bestselling author of Liberty and Tyranny and Ameritopia.

MARK R. LEVIN HAS MADE THE CASE, IN NUMEROUS NEW YORK TIMES BESTSELLING BOOKS—MEN IN BLACK, LIBERTY AND TYR­ANNY, AND AMERITOPIA—THAT THE PRIN­CIPLES UNDERGIRDING OUR SOCIETY AND GOVERNMENTAL SYSTEM ARE UNRAVELING. IN THE LIBERTY AMENDMENTS, HE TURNS TO THE FOUNDING FATHERS AND THE CONSTITUTION ITSELF FOR GUIDANCE IN RESTORING THE AMERICAN REPUBLIC.

For a century, the Statists have steadfastly constructed a federal Leviathan, distorting and evading our consti­tutional system in pursuit of an all-powerful, ubiqui­tous central government. The result is an ongoing and growing assault on individual liberty, state sovereignty, and the social compact. Levin argues that if we cherish our American heritage, it is time to embrace a consti­tutional revival.

The delegates to the 1787 Constitutional Conven­tion in Philadelphia and the delegates to each state’s ratification convention foresaw a time when—despite their best efforts to forestall it—the Federal govern­ment might breach the Constitution’s limits and begin oppressing the people. Agencies such as the IRS and EPA and programs such as Obamacare demonstrate that the Framers’ fear was prescient. Therefore, the Framers provided two methods for amending the Constitution. The second was intended for our current circumstances—empowering the states to bypass Congress and call a convention for the pur­pose of amending the Constitution. Levin argues that we, the people, can avoid a perilous outcome by seek­ing recourse, using the method called for in the Con­stitution itself.

The Framers adopted ten constitutional amend­ments, called the Bill of Rights, that would preserve individual rights and state authority. Levin lays forth eleven specific prescriptions for restoring our founding principles, ones that are consistent with the Framers’ design. His proposals—such as term limits for mem­bers of Congress and Supreme Court justices and lim­its on federal taxing and spending—are pure common sense, ideas shared by many. They draw on the wisdom of the Founding Fathers—including James Madison, Benjamin Franklin, Thomas Jefferson, and numerous lesser-known but crucially important men—in their content and in the method for applying them to the current state of the nation.

Now is the time for the American people to take the first step toward reclaiming what belongs to them. The task is daunting, but it is imperative if we are to be truly free.

Mark R. Levin, nationally syndicated talk-radio host, host of LevinTV, chairman of Landmark Legal Foundation, and the host of the FOX News show Life, Liberty, & Levin, is the author of six consecutive New York Times #1 bestsellers: Liberty and Tyranny, Plunder and Deceit, Rediscovering Americanism, Ameritopia, The Liberty Amendments, and Unfreedom of the Press. Liberty and Tyranny spent three months at #1 and sold more than 1.5 million copies. His books Men in Black and Rescuing Sprite were also New York Times bestsellers. Levin is an inductee of the National Radio Hall of Fame and was a top adviser to several members of President Ronald Reagan’s cabinet. He holds a BA from Temple University and a JD from Temple University Law School.

"[Mark Levin] has done an incredible job of drafting these proposed amendments aimed at re-establishing the balance between the federal and state governments...let our national conversation begin, and let us thank Mark Levin for initiating it."
— David Limbaugh, New York Times bestselling author of The Great Destroyer

"Mark Levin’s The Liberty Amendments is the revolutionary blueprint millions of Americans have been waiting for...carefully and powerfully written."
— Jeffrey Lord, The American Spectator

“Mark Levin's book is a serious work that can serve as an action plan for curing what ails us.”
— Cal Thomas, The Washington Examiner