100 Tricks to Appear Smart in Meetings: How to Get By Without Even Trying (Paperback) 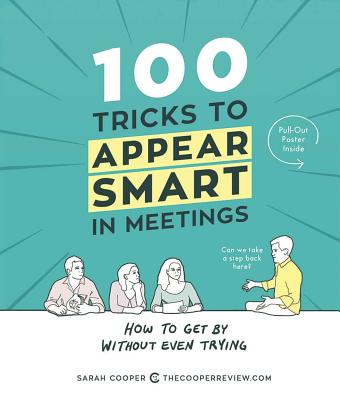 Funny because it's true. Comedian, star of the Netflix special Everything's Fine, and Trump lip-syncing sensation Sarah Cooper presents the must-have book you never knew you needed, 100 Tricks to Appear Smart in Meetings. In it, you will learn how to appear smart in less than half the time it takes to actually learn anything.

You know those subtle tricks your coworkers are all guilty of? The constant nodding, pretend concentration, useless rhetorical questions? These tricks make them seem like they know what they’re doing when in fact they have no clue. This behavior is so ingrained, so subtle, and so often mistaken for true intelligence that identifying it, calling it out, or compiling it into an exhaustive digest has never been attempted. Until now.

Complete with illustrated tips, examples, and scenarios, 100 Tricks gives you actionable ways to use words like “actionable,” in order to sound smart. Every type of meeting is covered, from general meetings where you stopped paying attention almost immediately, to one-on-one meetings you zoned out on, to impromptu meetings you were painfully subjected to at the last minute. It’s all here.

Open this book to any page and find an easy-to-digest trick with an even easier-to-digest illustration, guiding you on:If you hadn’t noticed these behaviors before, you will see them now—from your colleagues, your managers, and soon yourself. Each trick is a mirror to the reality of what happens in meetings, told in the form of hilariously bad advice—advice that you might just want to take. But probably not. But maybe.

"Sly satire that will bring endless joy to anyone who has ever endured the drudgery of corporate life."â€•Dan Lyons, writer for HBO's Silicon Valley and New York Times-bestselling author of Disrupted

In April 2020, Sarah went viral with a video called “How to Medical,” in which she lip syncs Trump’s proposed COVID-19 cures of UV light and disinfectant, viewed over 25 million times across Twitter, YouTube, Instagram and Facebook. She has since created dozens more Trump lip-syncs each garnering millions of views. She was named one of Variety’s 10 Comics to Watch for 2020, was featured at this year’s Just for Laughs Festival and has appeared on Jimmy Kimmel Live, The Tonight Show, Ellen, and has been featured in Vanity Fair, The New York Times, Washington Post, InStyle Magazine and countless others.

" ...One of the hottest comics of the coronavirus era." (The Los Angeles Times)

“Sarah Cooper Might Be the Best Trump Impressionist Ever." (The Daily Beast)

“Sarah Cooper is killing it with her Trump lip-syncs.” (Boing Boing)