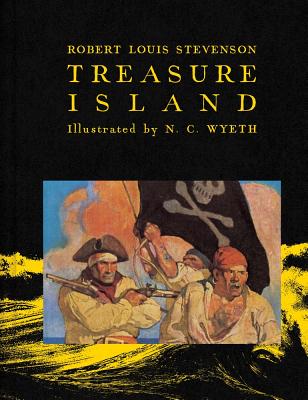 Robert Louis Stevenson’s classic pirate adventure that has thrilled readers for over a hundred years.

Masterfully crafted, Treasure Island is a stunning yarn of piracy on the fiery tropic seas—an unforgettable tale of treachery that embroils a host of legendary swashbucklers, from honest young Jim Hawkins, to sinister, two-timing Israel Hands, to evil incarnate, blind Pew. But above all, Treasure Island is a complex study of good and evil, as embodied by that hero-villain Long John Silver, the merrily unscrupulous buccaneer-rogue whose greedy quest for gold cannot help but win the heart of every soul who ever longed for romance, treasure, and adventure.

Robert Louis Stevenson was born on November 13, 1850. He spent his childhood in Edinburgh, Scotland, but traveled widely in the United States and throughout the South Seas. The author of many novels, including The Strange Case of Dr. Jekyll and Mr. Hyde, Kidnapped, The Black Arrow, and Treasure Island, he died in 1894.

N.C. Wyeth (1882–1945) began his artistic career as a young adult. Born in Needham, Massachusetts, Wyeth traveled the American West extensively and drew what he saw. His prolific career includes three thousand works and more than one hundred book illustrations, including those for a majority of the Scribner Illustrated Classics series.