The Search for WondLa (CD-Audio) 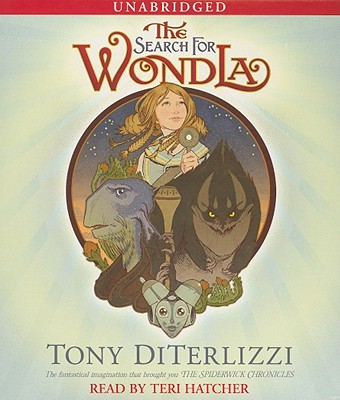 When a marauder destroys the underground sanctuary that Eva Nine was raised in by the robot Muthr, the twelve-year-year-old girl is forced to flee aboveground. Eva Nine is searching for anyone else like her: She knows that other humans exist because of an item she treasures—a scrap of cardboard on which is depicted a young girl, an adult, and a robot, with the strange word, “WondLa.”

Tony DiTerlizzi honors traditional children’s literature in this totally original space-age adventure—one that is as complex as an alien planet, but as simple as a child’s wish for a place to belong.

Tony DiTerlizzi is a #1 New York Times bestselling author and illustrator who has been creating books for twenty years. From fanciful picture books, such as Jimmy Zangwow’s Out-of-This-World Moon-Pie Adventure and The Spider and the Fly (a Caldecott Honor Book), to fantastic middle grade novels like Kenny & the Dragon and the WondLa trilogy, Tony imbues each story with his rich imagination. He created The Spiderwick Chronicles with Holly Black, which has sold millions of copies around the world. You can learn more about Tony at DiTerlizzi.com.