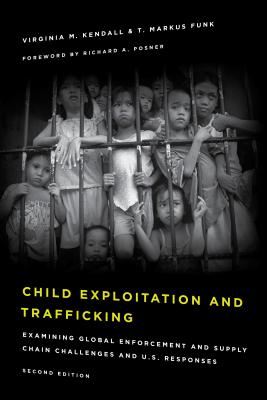 Each year, more than two million children around the world fall victim to commercial sexual and labor exploitation. Put simply, the growing epidemic of child exploitation demands a coordinated response. In addition to compliance concerns raised by the Foreign Corrupt Practices Act (FCPA), UK Bribery Act, and other more familiar transnational anti-corruption laws, today's companies must also respond to more novel legal requirements, such as those contained in the California Transparency in Supply Chains Act, Federal Acquisition Regulations on Trafficking in Persons in Federal Contracts, U.K. Modern Slavery Act of 2015, European Union's Directive on Transparency and its amendments, and the proposed federal Business Transparency in Trafficking and Slavery Act and other laws. This Second Edition of Child Exploitation and Trafficking: Examining Global Enforcement and Supply Chain Challenges and U.S. Responses brings fresh, practical thinking to this oft-misunderstood area of the law, helping erase some of its counterproductive mythology. The book not only provides the first comprehensive, practical introduction to the history and present-day reality of child exploitation and supply chain issues, but it also traces the interconnected web of domestic and transnational federal laws and law enforcement efforts launched in response thereto. The Second Edition not only is updated to reflect the latest trends and other development presented by two of the premier experts concerning this constantly-evolving field, but it also contains new chapters examining areas such as special issues in the fight against human trafficking and the raft of landmark anti-trafficking laws that herald a new compliance reality for the globe's business community. Written from the distinctive perspective of those who have spent their careers in the trenches investigating, prosecuting, and adjudicating these intricate, emotional cases, as well as those who are tasked with ensuring that products are free from the taint of child exploitation and force labor, the book is uniquely proscriptive, as well as descriptive, in the sense that it relies on real-world examples to serve up practical advice and reform proposals for those involved at all levels of this challenging area.

The Hon. Virginia M. Kendall was appointed to the United States District Court for the Northern District of Illinois in January 2006. She has sat by designation with the Seventh, Ninth, and Federal Circuit Courts of Appeals and served six years on the Judicial Conference's Codes of Conduct Committee. Prior to her appointment, she served as Deputy Chief in the Criminal Division of the United States Attorney's Office in Chicago where she worked for over ten years and tried numerous jury trials. During her tenure as an Assistant United States Attorney, she was appointed to the US Attorney General's Advisory Committee which reviewed all multi-jurisdictional child exploitation cases and acted as the Child Exploitation Coordinator in the Northern District of Illinois. She teaches law courses in trial practice, federal litigation, and human trafficking at University of Chicago Law School, Northwestern University School of Law and Loyola University Chicago School of Law. Aside from her own writing, she also serves as an editor of Litigation Journal and is a member of the American Law Institute where she serves as an Advisor to the drafting of a model penal code for sexual offenses. Judge Kendall lectures extensively both domestically and internationally to train judges, trial attorneys and investigators in the areas of trial law, rule of law, ethics, terrorism trials, crimes against women and children, human trafficking and public corruption. Internationally, she has traveled through the State Department, the Department of Justice, Lawyers Without Borders, Vital Voices, and various bar associations to Kenya, Egypt, Zambia, Liberia, Cyprus, India, Croatia, Latvia, Lithuania, Italy, the UK, Thailand, China, Japan and the Vatican to teach judges and trial attorneys. Domestically, she created a human trafficking training module for task forces and for judges and she regularly holds seminars to educate them and the public. She holds leadership positions in the American Bar Association, the International Bar Association, the Federal Bar Association and the Federal Circuit Bar Association. ​Judge Kendall has received numerous awards including the St. Robert Bellarmine Award, the Damen Award, and the Distinguished Jurist Award from Loyola University for her distinguished legal work and her service to the community; the Rape Victim Advocate's Visionary Award for her work with victims of sexual violence; the Eleanor Roosevelt Leadership Award for being a courageous and compassionate role model; the Women and Gender Rights Leadership Award from DePaul University School of Law; and an honorary degree from Dominican University which she received with her husband for their dual work serving the community. T. Markus Funk, prior to entering private practice, served as a federal prosecutor, Section Chief with the U.S. State Department-Balkans, clerk with the federal court of appeals and district court, and law professor at, among other institutions, Oxford University, Northwestern, and the University of Chicago. He is the founding Co-Chair of Perkins Coie's Supply Chain Compliance Practice (the first such dedicated practice among the largest 100 law firms), the founding Chair of the American Bar Association's Anti-Trafficking Task Force (2007), "Lawyer of the Year" (2013), Colorado's "Best Overall Litigator" and "Top White Collar Lawyer" (2015), and "10 Best Attorneys for the State of Illinois" (2014). During his time in public service, Markus and his team prosecuted "Operation Family Secrets," which National Public Radio lauded as "one of the most important criminal investigations . . . in American history." From 2004-06, Markus served as the Department of Justice Resident Legal Advisor for post-war Kosovo, helping oversee Balkan-wide efforts to modernize anti-trafficking and anti-corruption enforcement, and spear-heading the restructuring of Kosovo's post-conflict justice system. In recognition of his service while abroad, the U.S. Department of State conferred upon Markus its "Superior Honor Award," which is the highest general service award the State Department confers (Markus is the only person to have received both the Department of Justice's Attorney General's Award for Nation's top trial performance and the State Department's Superior Honor Award for service to the country). In addition to leading over 400 investigations for the US Government and private companies of all sizes, many involving labor exploitation and other supply chain abuses, Markus is the architect on over 100 compliance programs. Markus also authored more than 100 law-related academic and popular articles and chapters and 7 books, and his legal work has been featured in outlets such as The Atlantic Monthly, CNBC, CNN, The Economist, Investor's Business Daily, The Los Angeles Times, The National Law Journal, National Geographic Channel, The New York Times, MSNBC, and The Wall Street Journal.