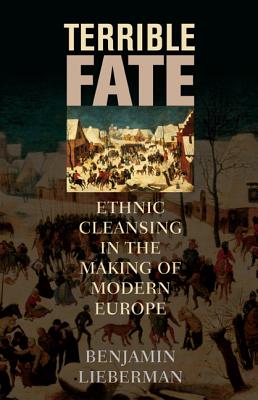 By Benjamin Lieberman
$19.95
Email or call for price.

In the modern Greek city of Thessaloniki, the ruins of a vast Jewish cemetery lie buried under the city's university. Nearby is the site of the childhood home of one of the founders of the modern Turkish state. These are tantalizing reminders of what was once the bustling cosmopolitan city of Salonica, home not just to Greeks but to thousands of Sephardic Jews, Turks, Bulgarians, and Armenians living and working peacefully alongside one another. Thessaloniki is just one example among many of what used to be. Over the past two centuries, ethnic cleansing has remade the map of Central and Eastern Europe and the Middle East, transforming vast empires that embraced many ethnic groups into nearly homogenous nations. Towns and cities from Germany to Turkey still show traces of the vanished and nearly forgotten ethnic and religious communities that once called these places home. In Terrible Fate, Benjamin Lieberman describes the violent transformations that occurred in Salonica and hundreds of other towns and cities as the Ottoman, Russian, Austro-Hungarian, and German empires collapsed, to be reborn as the modern nation-states we know today. His book is the first comprehensive history of this process that has involved the murder and forced migration of tens of millions of people. Drawing upon eyewitness accounts, contemporary journalism, and diplomatic records, Lieberman's story sweeps across the continent, taking the reader from ethnic cleansing's earliest beginnings in Bulgaria, Greece, and Russia in the nineteenth century, through the rise of nationalism, both world wars, the Armenian genocide, the Holocaust, and the rise and fall of the Soviet empire, up to the breakup of Yugoslavia in the 1990s. Along the way he examines the decisive roles of political leaders--not only monarchs and dictators but also those who were democratically elected--as well as ordinary people who often required very little encouragement to rob and brutalize their neighbors, or who were simply caught up in the tide of history.

Benjamin Lieberman is professor of history at Fitchburg State College in Massachusetts. A graduate of Yale and the University of Chicago, he has also written From Recovery to Catastrophe, a study of Weimar Germany. He lives in Maynard, Massachusetts.