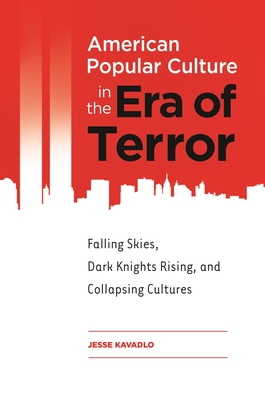 By Jesse Kavadlo
Email or call for price.
Usually Arrives in 2-10 Days

Bringing together disparate and popular genres of the 21st century, American Popular Culture in the Era of Terror: Falling Skies, Dark Knights Rising, and Collapsing Cultures argues that popular culture has been preoccupied by fantasies and narratives dominated by the anxiety --and, strangely, the wish fulfillment--that comes from the breakdowns of morality, family, law and order, and storytelling itself. From aging superheroes to young adult dystopias, heroic killers to lustrous vampires, the figures of our fiction, film, and television again and again reveal and revel in the imagery of terror. Kavadlo's single-author, thesis-driven book makes the case that many of the novels and films about September 11, 2001, have been about much more than terrorism alone, while popular stories that may not seem related to September 11 are deeply connected to it.

The book examines New York novels written in response to September 11 along with the anti-heroes of television and the resurgence of zombies and vampires in film and fiction to draw a correlation between Kavadlo's Era of Terror and the events of September 11, 2001. Geared toward college students, graduate students, and academics interested in popular culture, the book connects multiple topics to appeal to a wide audience.

Jesse Kavadlo, PhD, is professor of English at Maryville University of St. Louis.