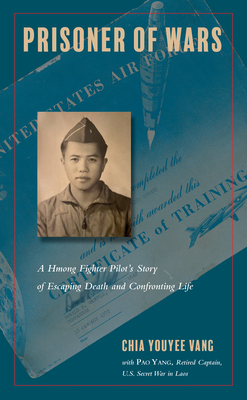 Retired Captain Pao Yang was a Hmong airman trained by the U.S. Air Force and CIA to fly T-28D aircraft for the U.S. Secret War in Laos. However, his plane was shot down during a mission in June 1972. Yang survived, but enemy forces captured him and sent him to a POW camp in northeastern Laos. He remained imprisoned for four years after the United States withdrew from Vietnam because he fought on the American side of the war.

Prisoner of Wars shows the impact the U.S Secret War in Laos had on Hmong combatants and their families. Chia Vang uses oral histories thatpoignantly recount Yang’s story and the deeply personal struggles his loved ones—who feared he had died—experienced in both Southeast Asia and the United States. As Yang eventually rebuilt his life in America, he grappled with issues of freedom and trauma.

Yang’s life provides a unique lens through which to better understand the lasting impact of the wars in Southeast Asia and the diverse journeys that migrants from Asia made over the last two centuries. Prisoner of Wars makes visible an aspect of the collateral damage that has been left out of dominant Vietnam War narratives.

Chia Youyee Vang is a Professor of History at the University of Wisconsin-Milwaukee. She is the author of Fly Until You Die: An Oral History of Hmong Pilots in the Vietnam War and Hmong America: Reconstructing Community in Diaspora, and the co-editor of Claiming Place: On the Agency of Hmong Women.