The New Kids: Big Dreams and Brave Journeys at a High School for Immigrant Teens (Hardcover) 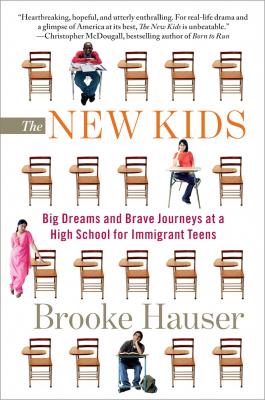 By Brooke Hauser
Email or call for price.
Special Order

Some walked across deserts and mountains to get here. Others flew in on planes. One arrived after escaping in a suitcase. And some won’t say how they got here.

These are “the new kids”: new to America and all the routines and rituals of an American high school, from lonely first days to prom. They attend International High School at Prospect Heights in Brooklyn, which is like most high schools in some ways—its halls are filled with students gossiping, joking, flirting, and pushing the limits of the school’s dress code—but all of the students are recent immigrants learning English. Together, they come from more than forty-five countries and speak more than twenty-eight languages.

A singular work of narrative journalism, The New Kids chronicles a year in the life of a remarkable group of these teenage newcomers—a multicultural mosaic that embodies what is truly amazing about America.

Hauser’s unforgettable portraits include Jessica, kicked out of her father’s home just days after arriving from China; Ngawang, who spent twenty-four hours folded up in a small suitcase to escape from Tibet; Mohamed, a diamond miner’s son from Sierra Leone whose arrival in New York City is shrouded in mystery; Yasmeen, a recently orphaned Yemeni girl who is torn between pursuing college and marrying so that she can take care of her younger siblings; and Chit Su, a Burmese refugee who is the only person to speak her language in the entire school. The students in this modern-day Babel deal with enormous obstacles: traumas and wars in their countries of origin that haunt them, and pressures from their cultures to marry or drop out and go to work. They aren’t just jostling for their places in the high school pecking order—they are carving out new lives for themselves in America.

The New Kids is immersion reporting at its most compelling as Brooke Hauser takes us deep inside the dramas of five International High School students who are at once ordinary and extraordinary in their separate paths to the American Dream. Readers will be rooting for these kids long after reading the stories of where they came from, how they got here, and where they are going next.