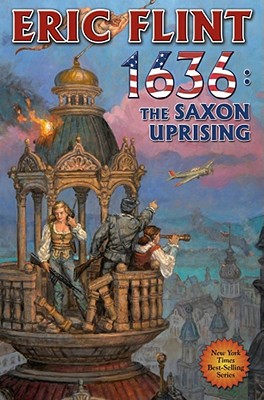 This is book number 13 in the The Ring of Fire series.

The West Virginia town of Grantville, torn from the twentieth century and hurled back into seventeenth century Europe has allied with Gustavus Adolphus, King of Sweden, in the United States of Europe. So, when Gustavus invades Poland, managing to unite all the squabbling Polish factions into repelling the common enemy, the time-lost Americans have to worry about getting dragged into the fight along with the Swedish forces.

But Mike Stearns has another problem. He was Prime Minister of the USE until he lost an election, and now he’s one of Gustavus’s generals; and he has demonstrated that he’s very good at being a general. And he’s about to really need all his military aptitude. Gretchen , who never saw a revolution she didn’t like, has been arrested in Saxony, and is likely to be executed. The revolutionary groups which she has been working with are not about to let that happen, and suddenly there’s rioting in the streets. Saxony’s ruthless General Baner is determined to suppress the uprising by the time-honored “kill them all and let God sort them out” method, which only adds fuel to the fire. So Gustavus orders Mike Stearns to go to Saxony and restore order. But he makes one mistake.

“. . . gripping and expertly detailed . . . a treat for lovers of action-SF or alternate history . . . battle scenes depicted with power . . . distinguishes Flint as an SF author of particular note, one who can entertain and edify in equal, and major, measure.” —Publishers Weekly (in a starred review)

“[This] alternate-history saga . . . is certainly a landmark in that subgenre. . . . A splendid example of character-centered alternate-history, this is a must read for its series' growing fandom.” —Booklist (Starred Review)

“. . . takes historic speculation to a new level in a tale that combines accurate historical research with bold leaps of the imagination. Fans of alternate history and military sf should enjoy this rousing tale of adventure and intrigue.” —Library Journal

“This alternate history series is already one of the best around and each new entry appears better than the previous one, a seemingly impossible feat . . . terrific. . . .” —The Midwest Book Review