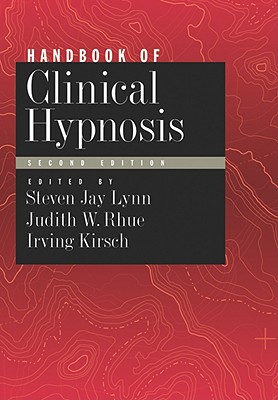 Today, hypnosis and hypnotic phenomena are in the mainstream of clinical, cognitive, and social psychology, and practitioners can benefit from a wealth of research to guide their interventions. In this second edition of the landmark Handbook of Clinical Hypnosis, editors Steven Jay Lynn, Judith W. Rhue, and Irving Kirsch have undertaken a significant revision of their classic text, first published over 15 years ago. Handbook of Clinical Hypnosis, Second Edition, is the ultimate resource for clinicians, researchers, and anyone interested in the theory.

Steven Jay Lynn is a professor of psychology and director of the Psychological Clinic at the State University of New York at Binghamton. He is a licensed psychologist and a diplomate (ABPP) in both clinical and forensic psychology, and he has served as a past president of the American Psychological Association's Division of Psychological Hypnosis. Dr. Lynn has received the Chancellor's Award of the State University of New York for Scholarship and Creative Activities, and he serves on 11 editorial boards, including the Journal of Abnormal Psychology. Dr. Lynn has published more than 260 articles and book chapters, as well as 18 books on the topics of psychotherapy, psychopathology, memory, and hypnosis. His research has been featured in numerous media venues, including popular magazines, television programs, and film documentaries. His research program has been funded by the National Institute of Mental Health. Judith W. Rhue is a professor in the Department of Family Medicine at the Ohio University College of Osteopathic Medicine. She has coedited four books, as well as numerous book chapters, papers, workshops and presentations. She maintains a clinical practice in addition to her teaching. Irving Kirsch is a professor of psychology at the University of Hull. He has published 10 books and more than 200 scientific journal articles and book chapters on placebo effects, antidepressant medication, hypnosis, and suggestion. His meta-analyses on the efficacy of antidepressants have been covered extensively in the international media and have influenced the official guidelines for the treatment of depression in the United Kingdom. His most recent book, The Emperor's New Drugs, was published in the United Kingdom and Canada in 2009 and will be published in the United States in February 2010.