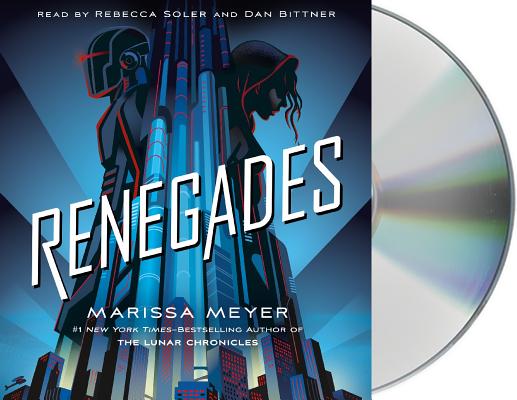 This is book number 1 in the Renegades series.

"Both narrators bring authenticity to the young characters...this fun and surprisingly thoughtful superhero tale will be a rewarding listen." — AudioFile Magazine

From #1 New York Times-bestselling author Marissa Meyer, comes a high-stakes world of adventure, passion, danger, and betrayal. This new audiobook will pull listeners in and never let them go...

The Renegades are a syndicate of prodigies—humans with extraordinary abilities—who emerged from the ruins of a crumbled society and established peace and order where chaos reigned. As champions of justice, they remain a symbol of hope and courage to everyone...except the villains they once overthrew.

Nova has a reason to hate the Renegades, and she is on a mission for vengeance. As she gets closer to her target, she meets Adrian, a Renegade boy who believes in justice—and in Nova. But Nova's allegiance is to a villain who has the power to end them both.

Renegades is the next hit YA audiobook listeners have been waiting for!

Marissa Meyer is the #1 New York Times–bestselling author of the Renegades Trilogy, The Lunar Chronicles series, the Wires and Nerve graphic novels, and The Lunar Chronicles Coloring Book. Her first standalone novel, Heartless, was also a #1 New York Times bestseller. Marissa created and hosts a podcast called The Happy Writer. She lives in Tacoma, Washington, with her husband and their two daughters.

Dan Bittner has narrated dozens of audio books and has starred on stage and on the screen, in movies such as Men in Black, Adventureland, and the Producers: The Movie Musical. He has also appeared onstage as Macbeth Malcolm and Sherlock Holmes in the Edinburgh Fringe Festival. He has narrated popular audio books such as The Eleventh Plague, Hero, and Forever.

Rebecca Soler is a film and voiceover actress who won a 2009 AudioFile Earphones Award for her narration of After by Amy Efaw. Her audiobook credits include work by authors such as Judy Blume, James Patterson and Sarah Dessen. Soler has also narrated the popular young adult series The Lunar Chronicles by Marissa Meyer. Her voice over credits include various video games, like Star Wars: The Old Republic and Red Dead Redemption and television shows such as Pokemon, Yu-Gi-Oh, and Teenage Mutant Ninja Turtles. She lives in New York City.

"[T]his fun and surprisingly thoughtful superhero tale will be a rewarding listen." - AudioFile

"In a vividly dark and fully imagined universe where special abilities are feared unless they can be strictly controlled and labeled, Meyer celebrates and subverts popular superhero tropes while mining the gray area between malevolence and virtue. Third-person narration builds suspense as it shifts between Nova and Adrian, a Renegade with his own secrets; the worldbuilding details and many combat sequences will captivate devotees of superhero comics. Beyond the capes and masks is a strikingly grounded story of star-crossed would-be lovers, deception, and the recognition that most of humanity exists between the extremes of good and evil."--Publishers Weekly, starred review

"Tackles a familiar genre in a brand new way."--Hypable.com

"Even reluctant fans of hero fantasies will fall for the smart plot and wonderful world-building. Prepare to fangirl."--Justine Magazine

"Meyer delivers a balance between intricate world-building and fast-paced action sequences. Nova’s childhood tragedy will draw sympathy from readers as they watch her integrate into the group of Renegades in order to seek vengeance. Back-stabbing, plot twists, and hidden agendas will have readers turning pages in an attempt to discover the truth."--School Library Journal

“A mash-up of fairy tales and science fiction . . . a cross between Cinderella, The Terminator, and Star Wars.” —Entertainment Weekly

“Prince Charming among the cyborgs.” —The Wall Street Journal

"In Heartless, the nonsense that is Wonderland gets a reverential makeover, full of heart and its own idiosyncratic character." —Gregory Maguire, Wicked and After Alice

"The author’s best fantasy yet. . . . Meyer has woven all the elements of darkness and light, fate and free will, and love and hatred into an unforgettable story of the evolution of the Red Queen from a young girl who dreamed of true love and freedom to a madwoman best remembered for the phrase 'Off with his head.' If you only read one fractured fairy tale this year, make it Heartless." —School Library Journal, starred review