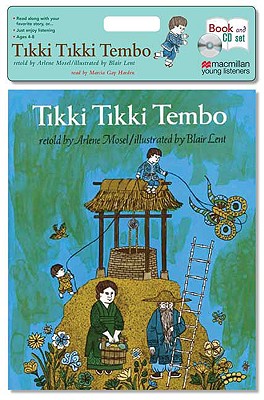 This humorous retelling of a favorite folktale recounts how the Chinese came to give their children short names. Beautifully illustrated, this perfect read-aloud storybook is one adults and children will enjoy sharing together again and again.When the eldest son fell in the well and most of the time getting help was spent pronouncing the name of the one in trouble, the Chinese, according to legend, decided to give all their children short names.

Tikki tikki tembo-no sa rembo-chari bari ruchi-pip peri pembo is the name of a mother’s first, and most honored, son. It means, "the most wonderful thing in the whole wide world!"

Arlene Mosel (1921-1996) first heard the story of Tikki tikki tembo as a child. When she grew up, she shared this wonderful tale with countless children, including her own. Because so many young listeners responded enthusiastically, she decided to write her own retelling, and "Tikki Tikki Tembo" became her first book for children. The book was named an American Library Association Notable Book and won the Boston Globe-Horn Book Award. In 1997, "The New York Times" named it one of the best 50 children's books of the previous 50 years. Mosel was also the author of "The Funny Little Woman," which won the 1973 Caldecott Medal for Blair Lent's illustrations and was recognized as an Honor Book by the Hans Christian Andersen International Children's Book Awards. Mosel was an associate professor of library science at Case Western Reserve University. Born in Cleveland, Ohio, Mosel died in Indianapolis in 1996. Marcia Gay Harden is an Academy Award-winning actress who has performed in many movies, including Pollock, Into the Wild, The Mist, Casa de los Babys, Mystic River, Flubber, Meet Joe Black, and The First Wives Club. She won an Oscar for Best Supporting Actress for her role as Lee Krasner in Pollock. She has appeared on television shows including Damages and Royal Pains. For Macmillan Audio, she reads Arlene Mosel's classic children's book, "Tikki Tikki Tembo." Blair Lent received the Caldecott Medal for "The Funny Little Woman" by Arlene Mosel. He has also received three Caldecott Honors. He is the illustrator of Ms. Mosel's "Tikki Tikki Tembo," a bestseller since its publication in 1968. Blair Lent lives in Cambridge, Massachusetts.

“This book and CD combination…encourages children to retell the story to others (thus developing their oral language skills)…This is a very popular story that children will enjoy hearing and telling over and over.” - Parents' Choice Awards, 2009 Parents' Choice Approved Award Winner

“The Oscar-winner’s reading voice is absolutely lovely. She has such fun with the story – and with the repeated pronunciation of “Tikki tikki tembo-no sa rembo-chari bari ruchi-pip peri pembo” – that you’ll have no problem listening again and again.” – Cookie Magazine

"Young children will love hearing the audio again and again and families will play it over and over because this classic suits all ages." - Chapel Hill Herald

"Macmillan Audio has taken a classic that is over 40 years old and added new life to TIKKI TIKKI TEMBO...Read by actress Marcia Gay Harden, kids and adults alike can enjoy the tongue twister of a name story that many of us have grown up with." – TeensReadToo.com