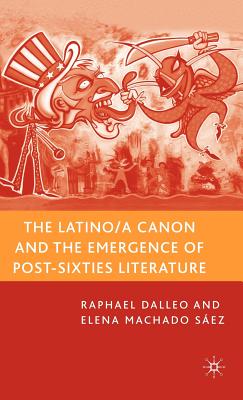 Please note this is a 'Palgrave to Order' title (PTO). Stock of this book requires shipment from an overseas supplier. It will be delivered to you within 12 weeks. In this first study of Latino/a literature to systematically examine the post-Sixties generation of writers, The Latino/a Canon challenges the ways that Latino/a literary studies imagines the relationship between art, politics, and the market.

“Raphael Dalleo and Elena Machado Sáez are to be commended on their compelling study of the complex relationship between the Civil Rights and post-Sixties eras of Latino/a-Caribbean literature, politics, and the market. The consideration of the challenges that face Cuban-Americans in their literary and artistic production is particularly timely, as well as their conception of a space for politically engaged, marketable literature in the twenty-first century. For these reasons, among others, The Latino/a Canon and the Emergence of Post-Sixties Literature is worthy of attention and merits scholarly study.”--Camino Real

"Esepcially because of the timeliness of its arguments, but also because of the breadth and depth of its study and argumentation, The Latino/a Canon and the Emergence of Post-Sixties Literature will be an important text for scholars and students of Latino(a) literature. One can already see how Dalleo and Machado Saez's book could well occasion a lively discussion of the next steps in the formation and cultivation of a Latino(a) canon for the twenty-first century."--Latino(a) Research Review

"The first book to look seriously at the process by which a panethnic US Latino/a literary canon has been constructed. One of the greatest strengths of The Latino/a Canon is its sustained attention to the market—as constructive of certain modes of reception for these texts, as a force with which the authors themselves must engage, and as it is represented within the texts themselves.  As an overview of the field and of the fundamental paradigms that have informed much Latino/a literary scholarship, the introduction is, quite simply, indispensable; it would supply a valuable framework for any course on Latino/a literature. The Latino/a Canon and the Emergence of Post-Sixties Literature is an important contribution to Latino/a literary studies and will be of enormous value to anyone wishing to attend to the politics and process of canon formation."--MELUS, as reviewed by Marta Caminero-Santangelo. Santagelo is Associate Professor of English and the author of On Latinidad: U.S. Latino Literature and the Construction of Ethnicity and The Madwoman Can't Speak: Or Why Insanity Is Not Subversive.

“This timely book challenges the ideological and chronological binaries behind the canon set up by established U.S. Latino/a literary critics. It provokes and exhorts readers to rethink the dualities—resident versus immigrant, oppositional versus mainstream—that imply that Latino/a literature can only be resistant through the anti-colonial discourse of the 60s and 70s. The clear and incisive discussions about canon formation, ideologies and the market are unprecedented and very much needed in the context of globalization.”--Frances Aparicio, author of Listening to Salsa
“Dalleo and Machado Sáez bring the hot topic of Latino/a literature to bear on important questions regarding the future and purpose of literature, arguing in favor of literature and its political place within the social. This is a call to scrutinize the way markets shape readers, including critics. This book will no doubt raise the bar of debates pertaining to the future of literature.”--Román de la Campa, author of Cuba on My Mind and Split States and Global Imaginaries
“The first book to be published on this subject that carefully examines the making of Latino/a literature in all its elements including the politics of marketing, publishing, and even book reviews. Dalleo and Machado Sáez clearly illustrate the inherent contradictions and tensions that characterize the making of the Latino/a literary canon and will force scholars to reconsider why some authors and not others are incorporated into their research and teaching.”--Bridget Kevane, author of Latino Literature in America
“Dalleo and Machado Sáez show a welcome sensibility to regional particularities and cultural discreteness in the outline of the social field of their research, attending to the significance of the New York or Miami milieu in determining the place of the works of Puerto Rican, Dominican-American, and Cuban diaspora authors within the larger corpus known as Latino literature. Their intervention enriches the critical discourse around the writings of U.S. Latino/a authors.”--Silvio Torres-Saillant, author of The Dominican Americans and An Intellectual History of the Caribbean

"Disrupting the binaries that divide Latinos/as and underscoring a critical hybridity, Dalleo and Machado Sáez recognize the heterogeneity of Latinidad and facilitate collective Latino/a mobilization. Dalleo and Machado Sáez move from an idealization of the past to a forward-thinking vision of a present and future influenced by the past."--Latino Studies