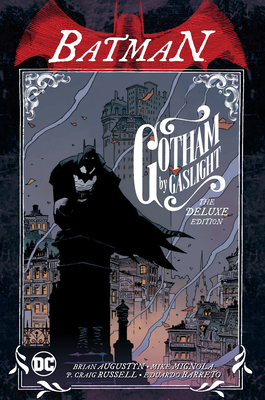 WHAT WOULD THE GOTHAM CITY OF THE 19TH CENTURY HAVE BEEN LIKE?

In an age of mystery and superstition, how would the people of Gotham react to a weird creature of the night, a bat-garbed vigilante feared by the guilty and the innocent alike?

Some would live in terror. Others would rest easier.

Only one man would take no notice at all...a man with other matters to attend to. His name? No one knows for sure. Most people know him only as Jack.

Batman: Gotham by Gaslight The Deluxe Edition spins the classic tale of the Victorian-era Bat-Man's encounter with the Butcher of Whitechapel alongside its acclaimed sequel and all of the Bat-Man's appearances since his debut, and includes a new introduction by writer BRIAN AUGUSTYN. Collects Gotham by Gaslight: An Alternate History of the Batman, Batman: Master of the Future, Countdown Presents: The Search for Ray Palmer: Gotham by Gaslight #1, and Convergence: Shazam! #1-2.

A former DC Comics editor, Brian Augustyn wrote some of the first DC Elseworlds tales, including Batman: Gotham by Gaslight. His other comics credits include The Flash, Impulse, The Ray, Black Condor, and more, as well as the indie comics sensation Trollords.