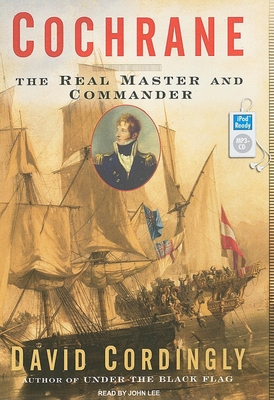 By David Cordingly, John Lee (Narrated by)
$24.99
Email or call for price.

From the bestselling author of Under the Black Flag comes the definitive biography of the swashbuckling nineteenth-century maritime hero upon whom Jack Aubrey and Horatio Hornblower are based. Nicknamed le loup des mers ("the sea wolf") by Napoleon, Thomas Cochrane was one of the most daring and successful naval heroes of all time. In this fascinating account of Cochrane's life, historian David Cordingly unearths startling new details about the real-life "Master and Commander," from his daring exploits against the French navy to his role in the liberation of Chile, Peru, and Brazil, and the shock exchange scandal that forced him out of England and almost ended his naval career. Drawing on previously unpublished papers, his own travels, wide reading, and the kind of original research that distinguished The Billy Ruffian, Cordingly tells the rip-roaring story of the archetypal romantic hero who conquered the seas and, in the process, defined his era.

David Cordingly was Keeper of Pictures and Head of Exhibitions at the National Maritime Museum for twelve years.

British narrator John Lee has read audiobooks in almost every conceivable genre, from Charles Dickens to Patrick O'Brian. He has won numerous Audie Awards and "AudioFile" Earphones Awards, and he was named a Golden Voice by "AudioFile" in 2009.

"John Lee's deep, booming voice and skill with every accent make him the ideal narrator for an audiobook swimming in a sea of nineteenth-century nautical words." ---AudioFile