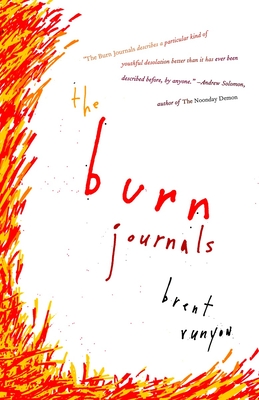 Fans of Thirteen Reasons Why, Running with Scissors and  Girl, Interrupted will be entranced by this remarkable true story of teenage despair and recovery

In 1991, fourteen-year-old Brent Runyon came home from school, doused his bathrobe in gasoline, put it on, and lit a match.

He suffered third-degree burns over 85% of his body and spent the next year recovering in hospitals and rehab facilities. During that year of physical recovery, Runyon began to question what he’d done, undertaking the complicated journey from near-death back to high school, and from suicide back to the emotional mainstream of life.

Brent Runyon is a writer and regular contributor to public radio programs, including This American Life, where portions of his award-winning memoir, The Burn Journals, first aired. Booklist praised The Burn Journals as “the defining book of a new genre, one that gazes unflinchingly at boys on the emotional edge.” In his novels Maybe and Surface Tension, he retains that raw honesty. Mr. Runyon lives on Cape Cod, Massachusetts.

“[The Burn Journals] describes a particular kind of youthful male desolation better than it has ever been described before, by anyone.”  -Andrew Solomon, author of The Noonday Demon“A fascinating account of the mending of a body and mind, told with the simple and honest sensibility of someone too young to have endured so much.” —Arthur Golden, author of Memoirs of a Geisha"Runyon has, perhaps, written the defining book of a new genre, one that gazes...unflinchingly at boys on the emotional edge ." -Booklist (starred review)"A taut, chilling account of the author's attempt to commit suicide...a must-read for teenagers struggling with self-doubt."-The Denver Post“An excruciating, brilliant book...WOW.” —A.M. Homes, author of Things You Should Know