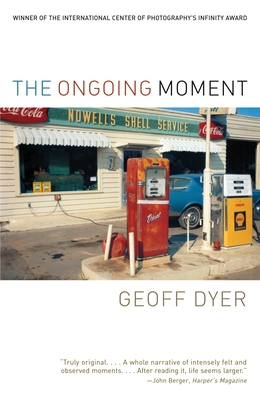 Great photographs change the way we see the world; The Ongoing Moment changes the way we look at both.

Focusing on the ways in which canonical figures like Alfred Stieglitz, Paul Strand, Walker Evans, André Kertész, Edward Weston, Dorothea Lange, Diane Arbus, and William Eggleston have photographed the same things—barber shops, benches, hands, roads, signs—award-winning writer Geoff Dyer seeks to identify their signature styles. In doing so, he constructs a narrative in which these photographers—many of whom never met—constantly encounter one another. The result is a kaleidoscopic work of extraordinary originality and insight.

A Fellow of the Royal Society of Literature and a member of the American Academy of Arts and Sciences, Geoff Dyer has received the Somerset Maugham Award, the E. M. Forster Award, a Lannan Literary Fellowship, a National Book Critics Circle Award for criticism, and, in 2015, the Windham Campbell Prize for non-fiction. The author of four novels and nine works of non-fiction, Dyer is writer in residence at the University of Southern California and lives in Los Angeles. His books have been translated into twenty-four languages.

“An ingenious journey through the history of photography.” —Art Review

“Dyer has the naturally generous impulse of a great storyteller.” —The Boston Globe

“A masterful meditation. . . in which great, often melancholy themes are raised with lightness and very dry humor.” —Alain de Botton, Books of the Year, The Observer (London)

“Surprising. . . . [Dyer] pulls off a string of shrewd, often original ideas about a group of artists whose work had until now seemed thoroughly digested.” —The New York Times Book Review