Gamora and Nebula: Sisters in Arms (Marvel Universe YA) (Paperback) 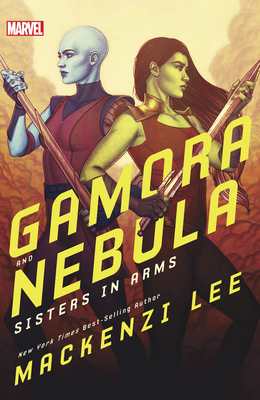 This three-book series explores the untapped potential and duality of heroism of popular characters in the Marvel Universe. The first book in these series, Loki: Where Mischief Lies, was an instant New York Times best seller and received two starred reviews.

Gamora arrives on Torndune—a once-lush planet that has been strip-mined for the power source beneath its surface—with a mission: collect the heart of the planet.

She doesn't know who sent her, why they want it, or even what the heart of a planet looks like. But as the right hand and daughter of Thanos, and one of the galaxy's most legendary warriors, her job is not to ask questions. Her job is to do what she's told, no matter the cost.

What she doesn't know is that her sister Nebula is in hot pursuit. Nebula has followed Gamora to Torndune in hopes of claiming the planet's heart first and shaming her sister as vengeance for the part she played in Nebula losing her arm. While Gamora falls in with a group of miners attempting to overthrow the tyrannical mining corporation that controls their lives, Nebula allies herself with the Universal Church of Truth, whose missionaries wait on every street corner to recruit more followers and tithes for the Matriarch. Both sisters hope their alliance will give them access to one of the massive diggers capable of drilling to the center of the planet.


And trust is the biggest lie in the galaxy.

Complete your Marvel YA collection with these best-selling fan-favorite novels:

Mackenzi Lee holds a BA in history and an MFA in writing for children and young adults from Simmons College. She is the New York Times best-selling author of the historical fantasy novels Loki: Where Mischief Lies; The Gentleman's Guide to Vice and Virtue, which won a 2018 Stonewall Honor Award and the New England Book Award; and its sequel, The Lady's Guide to Petticoats and Piracy. She is also the author of the nonfiction book Bygone Badass Broads, a collection of short biographies of forgotten women from history. In 2020, she was named one of Forbes's 30 Under 30 for her work in bringing minority narratives to historical fiction. When not writing, she works as an independent bookseller, drinks too much Diet Coke, and naps with her Saint Bernard, Queenie.

Estranged sisters Gamora and Nebula race to retrieve the heart of a dying planet, guided by forces beyond their knowledge. Lee’s latest explores a turning point for two of the Marvel Universe’s most complicated figures. Green-skinned mercenary Gamora sells her skills and connections to the highest bidder—which is usually her father, Thanos. He’s manipulated and pitted his adopted daughters against one another for years but always favors Gamora, leading blue-skinned Nebula to make increasingly desperate attempts to prove her worth; recently, she lost an arm for her trouble. Practical, efficient Gamora doesn’t dwell on the rivalry with her sister: She’s had little reason to doubt their father’s methods or motivations. Gamora’s latest assignment is on Torndune, a once-verdant planet that’s been ravaged for its subterranean deposits of Crowmikite, a valuable energy source. She doesn’t know she’s been followed there by Nebula, who’s also in pursuit of Torndune's heart and who possesses critical information about Gamora’s mission. Everything changes when the sisters reconnect in the midst of a rebellion against the powerful entities who profit from Torndune’s natural resources and discover just who hired Gamora—and why. Gripping and well-choreographed fight sequences—both physical and verbal—establish each sister’s strengths and weaknesses and foreshadow a final confrontation. Transcripts of a chaotic meeting between the Grandmaster and several guests punctuate the sisters’ alternating perspectives. Come for the action, stay for the emotional depth.——Kirkus Reviews

Gr 7 Up–When Gamora accepts a mission from an anonymous employer to retrieve the heart of Torndune, she has no idea the trouble that will follow. Nebula, who is equally manipulated, follows to confront Gamora. Through their journey, the two are reminded that they are stronger as sisters, until their progress is undone and a redemptive story becomes one of betrayal. Set before the events of Guardians of the Galaxy, the sisters have not yet become a brutal mercenary and a revenge-driven mess. At this time, they are just the abused, forged weapons of their father, the tyrannical titan Thanos. Nebula desperately desires kindness, and Gamora wants freedom. Their relationship is fractious but still viable. With so much lore, Marvel’s galaxy already teems with life. What Lee adds is Torndune. The vivid sights, smells, and beliefs from the miner’s hell starkly contrast with those of the pristine cult-corporation on Temple Ship. This is as much a story about the inequalities driven by the energy economy as it is about the sisters. VERDICT While no knowledge of Guardians of the Galaxy is required, this is a backstory for fans that deftly explains the relationship between Gamora and Nebula.——School Library Journal