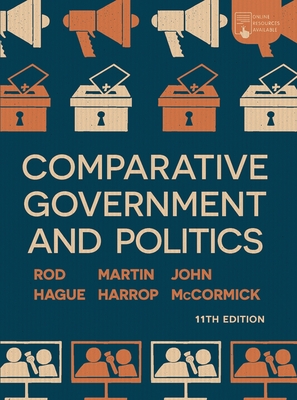 This is book number 12 in the Comparative Government and Politics series.

This revised and updated edition of a core textbook - one of the most well-established texts in the field of comparative politics - offers a comprehensive introduction to the comparison of governments and political systems, helping students to understand not just the institutions and political cultures of their own countries but also those of a wide range of democracies and authoritarian regimes from around the world.

The book opens with an overview of key theories and methods for studying comparative politics and moves on to a study of major institutions and themes, such as the state, constitutions and courts, elections, voters, interest groups and political economy. In addition, two common threads run throughout the chapters in this edition - the reversal of democracy and declining trust in government - ensuring that the book fully accounts for the rapid developments in politics that have taken place across the world in recent times. Written by a team of experienced textbook authors and featuring a range of engaging learning features, this book is an essential text for undergraduate and postgraduate courses on comparative politics, comparative government, introduction to politics and introduction to political science. New to this Edition:
- New and extended coverage of important topics such as authoritarian states, identities, ethnicity and political violence
- A brand new chapter on political economy
- An engaging new page design, in full colour for the first time
- An enhanced companion website, now providing an extensive testbank of questions for lecturers
- Publishing alongside John McCormick's new book on Cases in Comparative Government and Politics (October 2019), which offers more detailed coverage of the cases covered in this text.