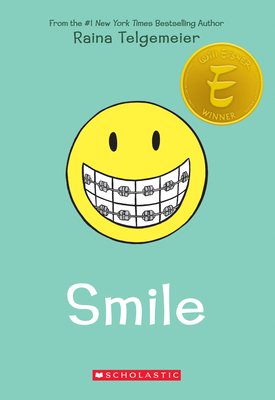 Raina Telgemeier's #1 New York Times bestselling, Eisner Award-winning graphic memoir based on her childhood!
Raina just wants to be a normal sixth grader. But one night after Girl Scouts she trips and falls, severely injuring her two front teeth. What follows is a long and frustrating journey with on-again, off-again braces, surgery, embarrassing headgear, and even a retainer with fake teeth attached. And on top of all that, there's still more to deal with: a major earthquake, boy confusion, and friends who turn out to be not so friendly.

Raina Telgemeier is the #1 New York Times bestselling, multiple Eisner Award-winning creator of Smile and Sisters, which are both graphic memoirs based on her childhood. She is also the creator of Drama and Ghosts, and is the adapter and illustrator of four Baby-sitters Club graphic novels. Raina lives in the San Francisco Bay Area. To learn more, visit her online at goRaina.com.

"One of the most widely loved kids' graphic novels in recent history." -- Booklist

"It hits home partly because there is nothing else out there like it." -- The New York Times Book Review

* "A wonderfully charming tale of family and sisters that anyone can bond with." -- Kirkus Reviews, starred review

* "The story both normalizes therapy and shows a child developing useful coping mechanisms for anxiety in a way that will reassure, even inspire, readers." -- Publishers Weekly, starred review

"A compassionate and accessible look at one girl's struggles with anxiety." -- The Bulletin of the Center for Children's Books

An ALA Stonewall Honor Book

* "Telgemeier has her finger on the pulse of middle-grade readers, and this might be her best yet." -- Booklist, starred review

* "Telgemeier nudges readers toward the edge of their comfort zone, but she never leaves them alone there." -- Publishers Weekly, starred review