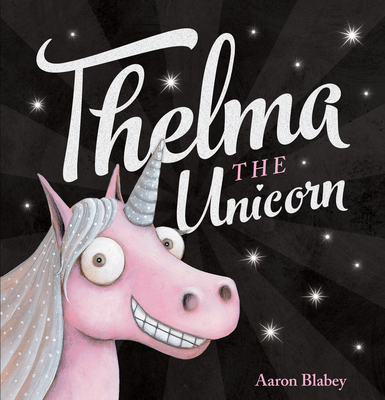 Thelma is an ordinary pony who wishes with all her heart to be a unicorn.Thelma dreams of being a glamorous unicorn. Then in a rare pink and glitter-filled moment of fate, Thelma's wish comes true. She rises to instant international stardom, but at an unexpected cost. After a while, Thelma realizes that she was happier as her ordinary, sparkle-free self. So she ditches her horn, scrubs off her sparkles, and returns home, where her best friend is waiting for her with a hug. From award-winning author Aaron Blabey comes this joyful book about learning to love who you are...even if you don't have sparkles.

AARON BLABEY has written many well-loved, bestselling books for children. He is the creator of three hugely successful series for children — the New York Times bestselling The Bad Guys (Les méchants), Pig the Pug (Carlos le carlin), and Thelma the Unicorn (Thelma la licorne). The Bad Guys movie released in 2022. It was produced by DreamWorks Animation with Aaron serving as an executive producer on the project.