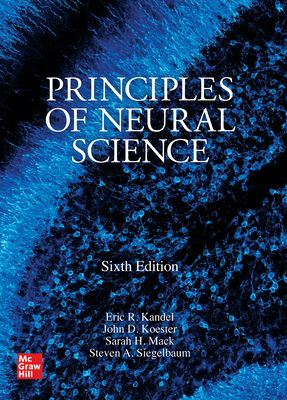 Publisher's Note: Products purchased from Third Party sellers are not guaranteed by the publisher for quality, authenticity, or access to any online entitlements included with the product.

The gold standard of neuroscience texts―updated with hundreds of brand-new images and fully revised content in every chapter For more than 40 years, Principles of Neural Science has helped readers understand the link between the human brain and behavior. As the renowned text has shown, all behavior is an expression of neural activity and the future of both clinical neurology and psychiatry is dependent on the progress of neural science. Fully updated, this sixth edition of the landmark reference reflects the latest research, clinical perspectives, and advances in the field. It offers an unparalleled perspective on the the current state and future of neural science.
This new edition features:
Principles of Neural Science, Sixth Edition benefits from a cohesive organization, beginning with an insightful overview of the interrelationships between the brain, nervous system, genes, and behavior. The text is divided into nine sections: Part I: Overall Perspective provides an overview of the broad themes of neural science, including the basic anatomical organization of the nervous system and the genetic bases of nervous system function and behavior. Part II: Cell and Molecular Biology of Cells of the Nervous System examines the basic properties of nerve cells, including the generation and conduction of propagated signaling. Part III: Synaptic Transmission focuses on the electrophysiological and molecular mechanism of synaptic transmission with chapters on neuronal excitability, neurotransmitters, and transmitter release. Part IV: Perception discusses the various aspects of sensory perception, including how information from the primary organs of sensation is transmitted to and processed by the central nervous system. Part V: Movement considers the neural mechanisms underlying movement and examines a new treatment that addresses how the basal ganglia regulate the selection of motor actions and instantiate reinforcement learning. Part VI: The Biology of Emotion, Motivation and Homeostasis examines the neural mechanisms by which subcortical areas mediate homeostatic control mechanisms, emotions, and motivation. Part VII: Development and the Emergence of Behavior looks at the nervous system from early embryonic differentiation to the formation and elimination of synapses. Part VIII: Learning, Memory, Language and Cognition expands on the previous section, examining the cellular mechanisms of implicit and explicit memory storage, as well as decision-making and consciousness. Part IX: explores the neural mechanisms underlying diseases and disorders of the nervous system, including autism spectrum disorder, epilepsy, schizophrenia, and anxiety.

Eric R. Kandel, MD, is University Professor and Kavli Professor of Brain Science, and Codirector of Columbia University's Zuckerman Institute; and Senior Investigator at the Howard Hughes Medical Institute. He is the recipient of the 2000 Nobel Prize in Physiology or Medicine for his research on the physiological basis of memory storage in neurons. Steven A. Siegelbaum, PhD, is Gerald D. Fischbach, M.D. Professor of Neuroscience; Professor of Pharmacology; Chair of the Department of Neuroscience; and Principle Investigator at Columbia University's Zuckerman Institute. Sarah H. Mack (deceased) was a gifted artist with a deep understanding and appreciation of neuroscience. Co-editor of Principles of Neural Science, Sixth Edition, she directed the art program for the book for more than thirty years. John Koester, PhD, is Professor Emeritus of Clinical Neuroscience and Psychiatry at Columbia University.