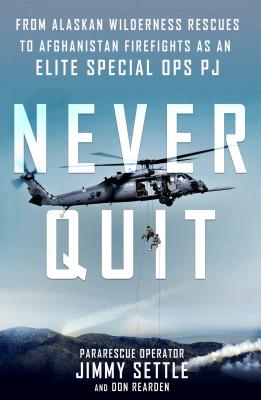 “That Others May Live” is a mantra that defines the fearless men of Alaska’s 212th Pararescue Unit, the PJs, one of the most elite military forces on the planet. Whether they are rescuing citizens injured and freezing in the Alaskan wilderness or saving wounded Rangers and SEALS in blazing firefights at war, the PJs are the least known and most highly trained of America’s warriors.

Never Quit is the true story of how Jimmy Settle, an Alaskan shoe store clerk, became a Special Forces Operator and war hero. After being shot in the head during a dangerous high mountain operation in the rugged Watapur Valley in Afghanistan, Jimmy returns to battle with his teammates for a heroic rescue, the bullet fragments stitched over and still in his skull. In a cross between a suicide rescue mission and an against-all-odds mountain battle, his team of PJs risk their lives again in an epic firefight. When his helicopter is hit and begins leaking fuel, Jimmy finds himself in the worst possible position as a rescue specialist—forced to leave members from his own team behind. Jimmy will have to risk everything to get back into the battle and bring back his brothers.

From death-defying Alaskan wilderness training, wild rescues, and vicious battles against the Taliban and Al Qaeda, this is an explosive special operations memoir unlike any that has come before, and the true story of a man from humble beginnings who became an American hero.

JIMMY SETTLE was born and raised in Alaska. His love of outdoor adventures and a strong desire to help people drew him to the most extreme rescue specialists in the world, the United States Air Force Pararescue, or PJ’s for short. Wounded in battle, Jim retired from his position as a PJ. He lives outside of Seattle with his wife and son. H

Jim was awarded an Airman’s Medal and Purple Heart with commendations for Valor in Operation Bulldog Bite in Afghanistan, logging 277 hours of Combat Search and Rescue. He is credited for saving 38 lives, and assisting in 28 others in combat, with additional saves and assists in the Alaskan wilderness.

He is the author of Never Quit.

DON REARDEN grew up on the tundra of Southwestern Alaska. An associate professor at the University of Alaska Anchorage, he is a produced screenwriter, a Rasmuson Foundation Project Fellow, and author of The Washington Post Notable novel from Penguin, The Raven’s Gift. He lives in Anchorage, Alaska.

"Settle, a gifted storyteller, takes us into the world of intense PJ training. . . . A remarkably life-affirming look into the training and work of those who give so much to assure our safety. More than an adventure story, it's a testament to ambition, persistence, spirit and resilience. It should be widely read." —Alaska Dispatch News

"The thrills come a mile a minute . . . . Settle delves into his hair-raising training experiences and rescue missions in Alaska. . . . This is classic military writing, and Settle’s stories will be readily enjoyed by those seeking to know more about this unusual military force." —Booklist

"Settle’s book is an inspiring read, both for civilians and those in uniform. His story will make you believe anything can be accomplished through hard work and persistence." —Leatherneck

"Whether in training or combat, in Philadelphia or Alaska or Afghanistan, Never Quit serves up an inspirational can-do attitude in every adrenaline soaked life-saving page." —Bill Streever, New York Times bestselling author of Cold

"Never Quit yanks you out the door of a perfectly good airplane with the men of Alaska’s elite pararescue squad, the PJs. From the mountains of Alaska to the streets of Philadelphia to the battlefields of Afghanistan, this book packs a double handful of intensity. Go on—make the jump and feel the sky on your face." —Kris Farmen, author of Blue Ticket and Turn Again

"From the treacherous caesiums of the Afghan mountain ranges to the unforgiving Alaskan frontier, there is no such thing as a routine rescue mission. Never Quit is an exciting glimpse into the world of Air Force pararescue operations." —Michael Golembesky, New York Times bestselling author of Level Zero Heroes and Dagger 22

"There is a space inside a hero that is measureable only by the frequency of his destiny, that if he listens closely enough, he can twist any notion of fate to his favor. Never Quit is that measurement of Jimmy Settle’s calling. The distance he closes between Alaska and Afghanistan redefines heroism and the tireless dedication to fragile human preservation." —Bryan Allen Fierro, author of Dodger Blue Will Fill Your Soul, Anchorage Fire Department Firefighter/Paramedic