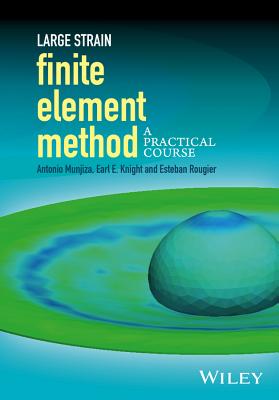 An introductory approach to the subject of large strains and large displacements in finite elements.

Large Strain Finite Element Method: A Practical Course, takes an introductory approach to the subject of large strains and large displacements in finite elements and starts from the basic concepts of finite strain deformability, including finite rotations and finite displacements. The necessary elements of vector analysis and tensorial calculus on the lines of modern understanding of the concept of tensor will also be introduced.

This book explains how tensors and vectors can be described using matrices and also introduces different stress and strain tensors. Building on these, step by step finite element techniques for both hyper and hypo-elastic approach will be considered.

Material models including isotropic, unisotropic, plastic and viscoplastic materials will be independently discussed to facilitate clarity and ease of learning. Elements of transient dynamics will also be covered and key explicit and iterative solvers including the direct numerical integration, relaxation techniques and conjugate gradient method will also be explored.

This book contains a large number of easy to follow illustrations, examples and source code details that facilitate both reading and understanding.

Antonio A. Munjiza, Queen Mary College, London, UKAntonio Munjiza is a professor of computational mechanics in the Department of Computational Mechanics at Queen Mary College, London. His research interests include finite element methods, discrete element methods, molecular dynamics, structures and solids, structural dynamics, software engineering, blasts, impacts, and nanomaterials. He has authored two books, The Combined Finite-Discrete Element Method (Wiley 2004) and Computational Mechanics of Discontinua (Wiley 2011) and over 110 refereed journal papers. In addition, he is on the editorial board of seven international journals. Dr Munjiza is also an accomplished software engineer with three research codes behind him and one commercial code all based on his technology. Earl E. Knight, Esteban Rougier and Ted Carney, Los Alamos National Laboratories, USAEarl Knight is a Team Leader in the Geodynamics Team at Los Alamos National Laboratory. His research interests include geodynamic modeling, rock mechanical modeling for deep water oil reservoirs and ground based nuclear explosion monitoring. Esteban Rougier is a Post Doctoral Research Associate at LANL. He has received his Ph.D. from Queen Mary, University of London in 2008` on Computational Mechanics of Discontinuum and its Application to the Simulation of Micro-Flows.