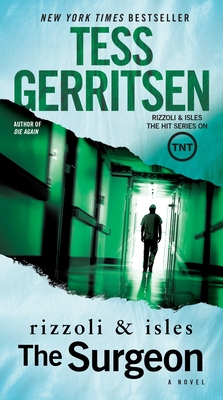 By Tess Gerritsen
$9.99
Email or call for price.

This is book number 1 in the Rizzoli & Isles series.

NEW YORK TIMES BESTSELLER • “A briskly paced, terrifically suspenseful work that steadily builds toward a tense and terrifying climax.”—People (Page-turner of the week)

He slips into homes at night and walks silently into bedrooms where women lie sleeping, about to awaken to a living nightmare. The precision of his methods suggests that he is a deranged man of medicine, prompting the Boston newspapers to dub him “The Surgeon.” Led by Detectives Thomas Moore and Jane Rizzoli, the cops must consult the victim of a nearly identical crime: Two years ago, Dr. Catherine Cordell fought back and filled an attacker before he could complete his assault. Now this new killer is re-creating, with chilling accuracy, the details of Cordell’s ordeal. With every new murder he seems to be taunting her, cutting ever closer, from her hospital to her home. And neither Moore nor Rizzoli can protect Cordell from a ruthless hunter who somehow understands—and savors—the secret fears of every woman he kills.

“[A] top-grade thriller . . . Sharp characters stitch your eye to the page. An all-nighter.”—Kirkus Reviews (starred review)

“Creepy . . . will exert a powerful grip on readers.”—Chicago Tribune

“A BRISKLY PACED, TERRIFICALLY SUSPENSEFUL WORK THAT STEADILY BUILDS TOWARD A TENSE AND TERRIFYING CLIMAX.”—People, Page-turner of the week

“THIS IS A STORY THAT TERRIFIES AND HEARTENS ALL AT ONCE. WHAT A RIDE!”—Iris Johansen

“CREEPY . . . WILL EXERT A POWERFUL GRIP ON READERS.”—Chicago Tribune

“ABSOLUTELY TERRIFYING . . . The finest, most thrilling Gerritsen novel yet. . . . I lost most of a night’s sleep finishing the book and the rest of the night trying to calm down. This is a story you’ll be talking up and thinking about for months to come. The tension is white-knuckle, the writing as deft as a surgeon’s slice.”—Michael Palmer, M.D., author of The Patient

“There is something perversely addictive about Tess Gerritsen’s prose, packed with narrative energy . . . The eyes simply cannot be torn away from the page. The pages turn one by one. The light stays on past midnight. A gradual tingling creeps up the back of the neck until every hair is standing on end.”—Maine Sunday Telegram

“Gerritsen fans know by now what to expect from her: a fascinating story with a gripping plot and believably human characters. Such is The Surgeon, and, in places, then some. Let new readers learn what the fans delight in.”—Booklist

“Compelling . . . Tautly plotted . . . Every bit as good as, if not better than, the novels of Robin Cook.”—Chattanooga Times

“Be prepared to have your heart race and your pulse pound, as Tess Gerritsen takes you on a trip to the nightmare world of The Surgeon. . . . If it’s high-voltage suspense you’re after, you’ve found the right book.”—Romantic Times

“Sizzling with ER intensity . . . Gliding as smoothly as a scalpel in a confident surgeon’s hand, this tale proves that Gerritsen, originally a romance writer, has morphed into a dependable suspense novelist whose growing popularity is keeping pace with her ever-finer writing skills."—Publishers Weekly

“Move Tess Gerritsen into the upper echelon. In fact, reserve a spot for her near the top of the list. . . . [This is] a remarkable book, highlighted by exquisite characterizations, perfectly paced plotting, and I-can’t-put-this-book-down-yet suspense.”—Gazette, Cedar Rapids, IA

“Few authors create such evil as well as Maine’s Tess Gerritsen. . . . [She] is a masterful storyteller who clearly understands how to write a suspenseful mystery.”—Times Record, Brunswick, ME

“GRIPPING . . . THIS BOOK WILL BLOW YOU AWAY. . . . [Gerritsen] develops the story at a frenetic pace, keeping the reader on fire.” —Deseret News, Salt Lake City, UT

“Terrifying, riveting, an all-around great read . . . [The Surgeon] starts off quickly, gets progressively faster (and more frightening), and there’s no letting up until the final and very satisfying last page.”—Snitch

“Exhilarating. I find myself still reeling from the chase and the terror of this suspenseful tale. I wanted to look away yet found myself so engrossed that I could not. Everything in my life took a second seat as I raced through this new book by Tess Gerritsen.”—“I Love A Mystery” newsletter

“Fast-paced and exciting . . . One of the best of Gerritsen’s medical thrillers . . . Don’t read it at the hospital; it might give you nightmares.”—The Pilot, Southern Pines, NC

“Riveting . . . You’ll double-check the locks on your door at night while reading [The Surgeon].”—The Gazette, Colorado Springs, CO