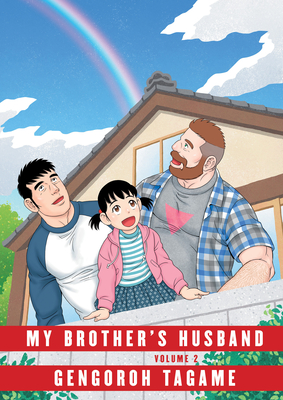 The acclaimed global sensation, from one of Japan's most notable manga artists: the concluding volume in the story of Yaichi, his daughter Kana, and how their meeting Mike Flanagan—Yaichi's brother-in-law—changes their lives and their perceptions of acceptance of homosexuality in their contemporary Japanese culture.

As Mike continues his journey of discovery concerning Ryoji's past, Yaichi gradually comes to understand that being gay is just another way of being human. And that, in many ways, remains a radical concept in Japan even today. In the meantime, the bond between Mike and young Kana grows ever stronger, and yet he is going to have to return to Canada soon—a fact that fills them both with impending heartbreak. But not before more than a few revelations come to light.

GENGOROH TAGAME was born in 1964 and lives in Tokyo. After graduating from Tama University of Art, Tagame worked as an art director while writing manga and prose fiction, contributing illustrations for various magazines. In 1994 he cofounded the epochal G-Men Magazine and by 1996 he was working full-time as an openly gay artist. He is the author of dozens of graphic novels and stories which have been translated into English, French, Italian, and Korean. His artwork has been exhibited in galleries across Europe and America. My Brother's Husband, Volume 1 marked his first all-ages title, and earned him a 2018 Eisner Award, as well as the Japan Media Arts Award for Outstanding Work of Manga from the Agency of Cultural Affairs.

Praise for Volume 2 of My Brother's Husband:

“The second volume, which unfolds in Tagame’s forthright, approachable black and white, has a pedagogical tone (cue high jinks and life lessons), but this is offset by its genuine humor, and its deceptively sophisticated investigation into the nature of love, marriage, divorce, bereavement and nontraditional child-rearing across multiple contexts.”
—Hillary Chute, The New York Times

“Achingly true . . . At its heart, My Brother's Husband is the story of a man coming to terms with the unquestioned cultural assumptions he's harbored all his life. But the genius of Tagame's art lies in its ability to slyly suggest—but by no means insist—that Yaichi's real journey of discovery may have just begun.”
—NPR

“This manga is powerful, and Tagame's prowess within the genre shines through every page . . . [My Brother's Husband] sneaks up on you, steals your heart away and refuses to return it . . . It will absolutely not disappoint.”
—Looking Glass Reads

“My Brother's Husband is not a subtle manga, but it is a legitimately moving one. By realistically portraying how prejudice and discrimination directly impact the characters' lives and deeply inform their relationships, Tagame's message of love is made abundantly clear.”
—Manga Bookshelf

“Poignant emotional depth . . . [a] gentle story . . . This well-paced, empathy-building story has lots of appeal and would be a good choice for readers making their first forays into manga.”
—Booklist

“[This] proves a heart-filling resolution. Readers will want tissues in hand for the final, bittersweet pages of this remarkable series.”
—Kirkus Reviews [starred review]

“Tagame's mastery of the human form allows him to simplify his approach . . . lending the book an inviting, open cartooning style, and further positioning My Brother's Husband as an accessible look at what it means to be gay in a different culture.”
—Paste Magazine

Praise for Volume 1 of My Brother's Husband:

“Not only is My Brother’s Husband very touching; it’s also, for the non-Japanese reader, unexpectedly fascinating. Gay life remains largely closeted in Japan, and Tagame’s complex but deftly told story seeks to examine the effect such secrecy has, not only on those who must live it, but also on their wider family relationships.”
—The Guardian (London)

“Refreshing. Transporting. Clever. Inspiring. If these are qualities that help books rise to the top of your summer reading list, your new number one is My Brother’s Husband . . . The story moves along quietly and gently, Tagame cleverly evoking parallels between mutual misperceptions of gays and straights, older and younger generations, Westerners and Japanese.”
—Passport Magazine