Relentless Hope: A True Story of War and Survival (Paperback) 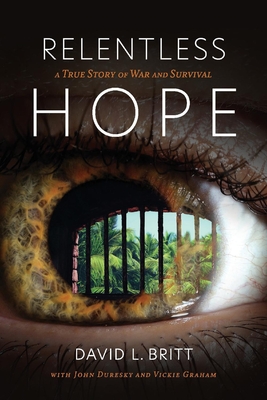 "Relentless Hope: A True Story of War and Survival" is a harrowing and inspirational survival story of one man and his family wrapped in the accurate historical context of the war in which he fought and the uncertainty his family endured.

Historical facts are extracted from war crimes testimony, Chet's personal diary and letters and the personal accounts Chet told to his family, as well as the codified stories of multiple survivors of the same experiences and official WW II operations reports.

Extensive research revealed unknown truths which allowed us to encourage the correction of historical records. A wealth of information did not make it into this book, but this volume of research can be accessed at the website, including actual gun camera film of the U.S. Navy attacks on the prison ship Oryoku Maru on December 14. 1944.

Chet cheated death many times from the age of 4 years and through near death experiences in combat and as a prisoner of war of the Japanese; first in the Philippines then in Japan and Manchuria.

The number of times death could not claim him is remarkable in light of the true experiences of starvation, dehydration, malaria, infection from wounds, and other diseases.

He travels on 3 ships from Philippines to Japan with two of the ships attacked by U.S. Navy dive bombers and torpedo aircraft. Both of these ships are so badly damaged they are scuttled and hundreds of his fellow prisoners die. Ironically, the prisoners cheer for their countrymen to hit the ships with their bombs, inviting death at friendly hands over continued unbearable life in enemy chains.

The exposure to the extreme cold of winter, clothed only in a loin cloth in an unheated hold of a ship, nearly took his life. He was abandoned for dead but his heart would not stop beating.

He continually dreams and thinks about food and aches to hold the son that he had not yet seen and young wife, evacuated to the U.S. before the outbreak of World War II in the Pacific.

He is skeletal in appearance, after 3 1/2 years as a prisoner of the Japanese; his 6'3" weighing only 103 pounds. He is experiencing an attack of beri-beri and he is unable to stand or walk.

Once again at death's door the grim reaper is held at bay, by a miracle, as the Japanese surrender and American rescuers, including a classmate from West Point, are parachuted into Manchuria, to take control of his sixth and last prison. Medicine and food dropped by B-29s provide the nourishment and drugs needed to prevent his death.

He will spend many months in hospitals receiving medical attention and diets high in protein and vitamins to attempt to rebuild his weight, strength and health. Two months of recovery are necessary to restore his body and fight off additional attacks of malaria.

He returns to active duty in 1946 and works with German scientists brought to the U.S. after the war to work on rocket technology. His love of aviation and math skills are brought together in what must have been his dream job.

The trials of life that Chet and Grace have experienced since their wedding in 1940, lives interrupted by war, seem to be over and the peaceful happy marriage they envisioned appears to be coming a reality. But the story is not yet over.

After his military service, Dave worked as vice president for three different defense contractors and helped his daughter begin her own successful company.

He is permanently retired as of 2012.