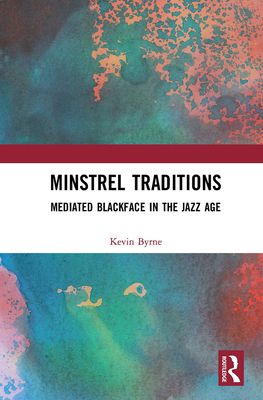 Minstrel Traditions: Mediated Blackface in the Jazz Age explores the place and influence of black racial impersonation in US society during a crucial and transitional time period. Minstrelsy was absorbed into mass-culture media that was either invented or reached widespread national prominence during this era: advertising campaigns, audio recordings, radio broadcasts, and film. Minstrel Traditions examines the methods through which minstrelsy's elements connected with the public and how these conventions reified the racism of the time.

This book explores blackface and minstrelsy through a series of overlapping case studies which illustrate the extent to which blackface thrived in the early twentieth century. It contextualizes and analyzes the last musical of black entertainer Bert Williams, the surprising live career of pancake icon Aunt Jemima, a flourishing amateur minstrel industry, blackface acts of African American vaudeville, and the black Broadway shows which brought new musical styles and dances to the American consciousness. All reflect, and sometimes incorporate, the mass-culture technologies of the time, either in their subject matter or method of distribution. Retrograde blackface seamlessly transitioned from live to mediated iterations of these cultural products, further pushing black stereotypes into the national consciousness.

The book project oscillates between two different types of performances: the live and the mediated. By focusing on how minstrelsy in the Jazz Age moved from live performance into mediatized technologies, the book adds to the intellectual and historical conversation regarding this pernicious, racist entertainment form. Jazz Age blackface helped normalize new media technologies and that technology extended minstrelsy's influence within US culture. Minstrel Traditions tracks minstrelsy's social impact over the course of two decades to examine how ideas of national identity employ racial nostalgias and fantasias. This book will be of great interest to scholars and researchers in theatre studies, communication studies, race and media, and musical scholarship

Kevin Byrne is an Assistant Professor of Theatre Studies in the School of Theatre, Film, and Television at the University of Arizona. He is an editorial board member of the Journal of American Drama and Theatre. His research interests include African American theatre history, theories of racial impersonation, and contemporary performance practices.