Villain: The Voices of Shattered (Paperback) 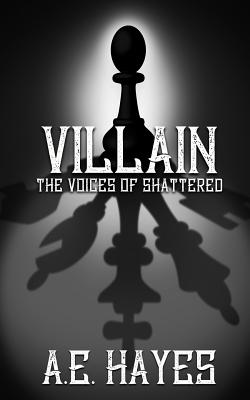 "You will die this way," I heard the voice say to me.
"I'm just drunk," I said to myself, shouting over the radio.
"You're just an idiot," she said. "You're gonna get into a wreck and we're going straight to hell."
Going straight to hell?
Crazy brain, I thought. Don't you know better?
I cannot go where I already exist.
------------
In Shattered: Memoirs of an Amnesiac, A.E. Hayes opened a window for her readers to see into some of the darkest parts of her life. From her experiences with a traumatic brain injury and amnesia to the realities of living with Dissociative Identity Disorder, Hayes never shrank from the truth.

But that's not the whole story.

While writing Shattered, Hayes was struck by the notion that she was often the villain in her own story. From that idea, Villain was born.

But what is a villain, really? The concept of good and evil has always fascinated Hayes, and Villain provides a space to explore that idea. But this book goes farther than that. Villain also gives voice to several of the alters that were created by traumas in Hayes's past. From a gut-wrenching story of love gone wrong to an exciting tale of hijinks at a casino and more, the alters' stories are sometimes harrowing and sometimes hilarious, but they're always authentic.

Villain will entice and intrigue, and it will leave readers with one question: are they the heroes or villains in their own stories?