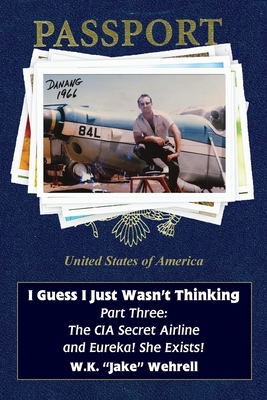 Part Three: The CIA Secret Airline and Eureka She Exists is way more than an expos of covert foreign operations. Diverse and widely separated genres abound. You will turn no page without excitement and concern. It begins in Southeast Asia where Roger is witness to the defilement of humanity, seeing firsthand, the results of flawed military policy, and most importantly--the never understood will of the Vietnamese "silent majority;" the real reason the War was from the onset--unwinnable. Back in the states, divorced but dedicated to being the best provider for his family, he finds himself pitifully out of touch with all that surrounds him. After a series of endeavors--including a nausea-provoking "pyramid sales" scheme, he retreats to more familiar territory. You will accompany him on ten-hour Atlantic crossings and all-night flights across the Sahara--the sole pilot in small aircraft that were in no way designed for either Have a cup of tea with Judy Garland; experience a UFO sighting over the Caspian Sea, jungle crashes, Roger's capture, and his vision-saving surgery at the Clinica Barraquer in Barcelona (where he happens to share a private dinner with John and Yoko) Sadly, these exploits do not mask the deficiency that has subjugated his being. Contending with an ill-fitting world, he continues to seek that one magic, but now historically fated-to-failure union. Ashamed and embarrassed he sincerely and apologetically strives to explain to you his life-altering condition and his otherwise inexplicable behavior. However Readers will be surprised and gratified; unable not to leap to their feet and applaud an entirely unexpected but spectacular turn of events at the end of this part.