A Discourse on Method (Paperback) 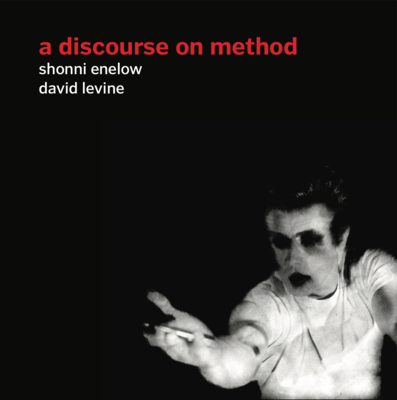 By David Levine, Shonni Enelow
Email or call for price.
Not Currently Available Through Reach and Teach

A Discourse on Method is a paranoid theory and a counterfactual history of American method acting, conducted in two parts. The first is Shonni Enelow's account of a journey into the churning guts of the Method archives; the second is David Levine's monologue Edition of Eight, delivered by an artificial human. Illustrated throughout with spiritual, conspiratorial, and documentary images.

Shonni Enelow is the author of Method Acting and Its Discontents: On American Psycho-Drama, which won the George Jean Nathan Award for Dramatic Criticism. She is an associate professor of English at Fordham University. David Levine is an artist and writer living in New York. He is Professor of the Practice of Performance, Theater, and Media at Harvard University. Levine divides his time between New York and Berlin. His performance and exhibition work have been presented by Creative Time, MoMA, Documenta XII, Mass MoCA, PS122, the Luminato Festival, the Watermill Center, The Luma Foundation (Arles), Tanya Leighton Gallery (Berlin), Blum and Poe (Los Angeles), and Untitled (New York) among others. He was a 2012-13 Radcliffe Fellow in Visual Arts at Harvard University, and is Professor of Art at Bard College Berlin, where he is the Director of Visual and Performing Arts. His work has been featured in Artforum, Frieze, and the New York Times, and his writing has appeared in Parkett, Mousse, Cabinet and Triple Canopy. He recently spoke about Bruce Nauman's work for the DIA Foundation's Artists on Artists lecture series, and will participate in the exhibition Hotel Theory at REDCAT this October.