Life on a String: The Yale Puppeteers and The Turnabout Theatre (Hardcover) 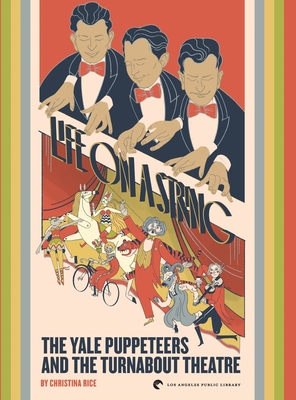 They amused Albert Einstein, enchanted Elsa Lanchester, discovered Odetta, and sort of impressed Amy Semple McPherson. Collectively known as the Yale Puppeteers, Harry Burnett (1901-1993), Forman Brown (1901-1996), and Richard "Roddy" Brandon (1904-1985) serendipitously found each other in the 1920s and formed a partnership that lasted until their deaths nearly 70 years later. The trio developed a shared vision of sophisticated adult entertainment in the form of marionettes and from 1941-1956 operated the Turnabout Theatre on La Cienega Boulevard in Los Angeles which brought them international fame.

In 1998, the Los Angeles Public Library became custodian of a vast collection of ephemera chronicling the careers of the Yale Puppeteers and their Turnabout Theatre. For the first time, these programs, posters, scrapbooks, costumes, props, and marionettes are on exhibition. "Life on a String: The Yale Puppeteers and the Turnabout Theatre" presents the life's work of these three men who forged a professional and deeply personal bond that lasted a lifetime and who invited the city of Los Angeles to turnabout