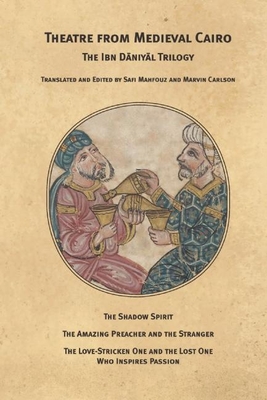 This volume contains the first translation of the only three plays that survive from the medieval Arabic theater: the farces The Shadow Spirit, The Amazing Preacher and the Stranger, and The Love-Stricken One and the Lost One who Inspires Passion, created by Ibn Daniyal in thirteenth-century Cairo.

Dr. Safi Mahmoud Mahfouz is an Associate Professor of Modern American Literature - Drama and Theatre, Comparative Literature and Middle Eastern Languages. He is the Head of the Department of English Language and Literature at the Faculty of Educational Sciences and Arts at UNRWA University in Amman/Jordan. Currently he is a Fulbright postdoctoral visiting scholar of Arabic drama in translation at the Martin E. Segal Theatre Center, the Graduate Center of the City University of New York. His research interests cover a wide range of topics including modern American literature, American canonical drama, American ethnic theaters, Middle Eastern literature, world literature, comparative literature, literary theory and contemporary poetics, postmodernism, ethnicity, diaspora, and postcolonialism. Dr. Mahfouz has published many articles in international peer-reviewed journals in the United States, Britain and Canada.