The Beatles and Sgt. Pepper: A Fans' Perspective (Hardcover) 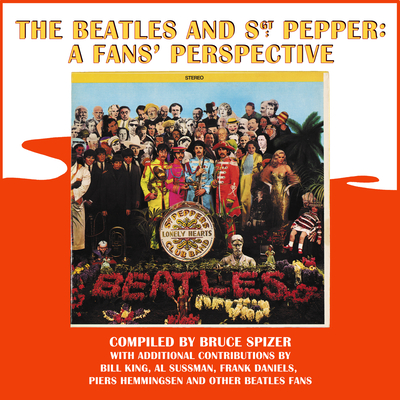 Sgt. Pepper’s Lonely Hearts Club Band is the most famous album by the most famous band in the history of rock ’n’ roll. It became the soundtrack for the Summer of Love (1967), with its music constantly flowing out of Hi-Fi systems, portable record players and radios throughout the world. That summer, people weren’t just listening and dancing to Sgt. Pepper, they were discussing its music, its sounds, its lyrics and its remarkable cover. The attention to detail taken by The Beatles for every aspect of the album, from its recording down to the red and white psychedelic inner sleeve that held the vinyl disc, made Sgt. Pepper an all-encompassing and mind blowing experience collectively shared by millions.

The Beatles and Sgt. Pepper: A Fans’ Perspective is just that — a book about Sgt. Pepper, written by fans for fans, compiled by Bruce Spizer, acclaimed Beatles author/historian and life-long first generation Beatles fan. In addition to essays written by Spizer, Al Sussman, Frank Daniels, Piers Hemmingsen and Bill King, the book contains dozens of fan recollections that add a personal touch demonstrating the true impact of the act we’ve known for all these years, Sgt. Pepper’s Lonely Hearts Club Band.

Bruce Spizer has written eight critically acclaimed Beatles books, including The Beatles Records on Vee-Jay, The Beatles' Story on Capitol Records, The Beatles on Apple Records, Beatles for Sale on Parlophone Records and The Beatles Are Coming! The Birth of Beatlemania in America. He has appeared on several national television programs (ABC's Good Morning America and Nightline, CBS's Early Show, CNN and Fox National News) and radio programs (NPR, ABC, BBC) as a Beatles expert and has given presentations at the Grammy Museum, the Rock 'N' Roll Hall of Fame and Museum, the American Film Institute, the Paley Center for Media, the Newseum, New York's Lincoln Center and Beatles conventions throughout the United States and in Liverpool, England. Bruce serves a consultant for Universal Music Group, Capitol records and Apple Corps, Ltd. on Beatles projects.