Introduction to a True History of Cinema and Television (Hardcover) 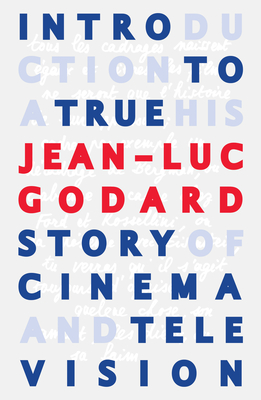 In 1978, just before his return to the international stage, the world’s most renowned art-film director Jean-Luc Godard improvised a series of fourteen one-hour talks at Concordia University in Montreal. These talks, part of a projected video history of cinema, were published in French in 1980. In this definitive English-language volume, translator Timothy Barnard has worked from the original footage to carefully revise and correct the faulty French transcription. The result is the most extensive and revealing account of Godard’s own work, his methods, and his critical opinions. Never has Godard been as loquacious, lucid, and disarmingly frank as he is here. This volume, by the wittiest and most idiosyncratic genius cinema has known and available for the first time in English, is certain to become one of the great classics of film literature.

JEAN-LUC GODARD is a pioneer of the French new wave. His effect on modern cinema is incalculable. He was a director and a critic for Cahiers du cinéma, and his numerous films include Breathless, A Woman Is a Woman, Contempt, Band of Outsiders, Masculin féminin, Pierrot le fou, and Tout va bien. Today, Godard remains our greatest lyricist on historical trauma, religion, and the legacy of cinema.

TIMOTHY BARNARD is a translator and publisher. He is the founder of caboose, an independent publisher of books about film located in Montreal, Canada.

MICHAEL WITT is a professor of cinema at the University of Roehampton in London. He is the author of Jean-Luc Godard: Cinema Historian and coeditor of many books on French film, including Jean-Luc Godard: Documents, The French Cinema Book, and For Ever Godard.

"The Godard who emerges from Introduction to a True History of Cinema and Television is a quintessential twentieth-century high modernist—the author of an ongoing, not yet completed project comparable in ambition to In Search of Lost Time or The Cantos, composed in an idiolect that, as with Joyce or Picasso or Gertrude Stein, effectively reinvented a medium."
— J. Hoberman

“A must for any cinephile…The book is both history and his-story, and the tension of the ‘subjectively objective’ is maintained throughout. Godard sees traditional film criticism, ‘done by literary types,’ as committing a category mistake by privileging the text over the image, failing to notice that ‘images are freedom and words are prison,’ and perpetuating a violence on the medium.”
— Publishers Weekly

“This is a major event in film studies: we hear as if for the first time the live pulse of Godard's lectures and discussions in Montreal in 1978—a series of fourteen meetings that pave the way for the eight chapters of his Histoire(s) du cinéma (1988–1998). Indispensable to anyone seriously interested in the history and philosophy of film.”
— James Williams